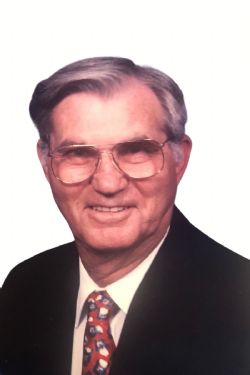 Jim held many titles throughout his life, but we feel his greatest one was ''Papa''.

Papa joined the Navy shortly before his 18th birthday. He served in the Korean war for 3 and half years as a radar/sonar operator. This opportunity would eventually lead him to his career later in life. After serving in the Navy, Papa decided to attend college at Jacksonville Baptist College in Jacksonville, Texas. Within two weeks of being at JBC, he gave his life to Christ and remained steadfast to Him throughout his life. Also at JBC, he met his future wife, Mildred Graham. Their first date was to a church service on a Wednesday night. They continued their church service dates until they were wed on August 14th, 1954. After college Papa and Mimi lived in various cities in Arkansas, Louisiana, and Oklahoma. During this time, Papa and Mimi added to their family, Sharon Lynn and Gary Allen. Eventually, they landed in Fort Smith, Arkansas where Papa would continue his career as an Air Traffic Controller for the FAA. They lived in Fort Smith until 3 years after his retirement in 1982.

In 1985, Papa and Mimi moved to Greenbrier, Arkansas where they have made their home to this day. They made retirement look fun to everyone. From having a beautiful big garden to taking on wood working as a hobby building cabinets, doll houses, desks, and many many deacon's benches. He and Mimi also served as President of the Arkansas Family Campers and RV'er's where they would travel monthly with a group that became lifelong friends. They captured many of their camping adventures on camera, which led to many hours of watching slides with a projector and screen that never cooperated together. This also led to many ''somewhat intense discussions'' between Mimi and Papa about where a particular lake, mountain, or tree was specifically located.

As stated before, Papa was faithful to serve the Lord. He taught Sunday school for over 50 years, sang in a gospel quartet, and served on the Board of Trustees for Central Baptist College. He was an ordained Deacon in the churches they attended, and was known in all of them as being a pastor's true friend. If you needed any type of information on the book of Revelation, Papa was your best source. He was deeply intrigued and passionate about what the book of Revelation meant and how to explain it to others.

Papa was also passionate about conservative political values. He and his daughter Sharon started Moral Action Network to help churches and individuals become aware of what was being discussed and various bills being voted on in congress. Papa was a proud American and believed with all his heart that America was built on ''One Nation Under God''. He had a burden for our country and for our leaders to lead as Christ would lead.

He was preceded in death by his parents, Joseph L. and Georgia T. Lambright, brother Joel Lambright, and great-granddaughter Tinlee Elise Dreher.

The family would like to thank Dr. Parker Norris, hospice nurse David Cariker and the hospice team for their wonderful care and service to our family. A special thank you to Dr. Jessica Tackett for her loving support, communication, and extra attention she gave to Papa and our family as we navigated new seasons the last few years.

In lieu of flowers, donations can be made to Central Baptist College in Conway, AR.

We are so sorry for your families loss. It is hard, but knowing he is up In heaven helps give peace!
Our deepest sympathies,
Randy, Cathy, & Taylor Neal

He was a great brother, father, husband, grandfather and Christian that led by example to all. He is missed by all those that ever met him. My prayers go out to the immediate family that they will be comforted in the faith that H J had in Christ.

I smile when I think of your family Sharon! Lanny always told so many stories at work about Mimi and Papa and everyone knew how much love there was that held your family bond so close. I’m very sorry for your loss.
Pat Criswell

So sorry for your loss! Praying for your family in this difficult time!

Prayers for the family during this time of loss. May you feel God’s presence in a mighty way. ♥️
Vicki Perritt Beck

Praying for you and your family.

Our thoughts and prayers are with y’all today and in the days to come! It’s never easy to give them up, but knowing they’re in heaven is a comfort to us!

Wishing your entire family has complete peace from God, what a wonderful reunion is taking place.

Heaven's gain! May the Lord grant peace and comfort to all of the Lambright family. You are all in my prayers.
Blessings!

Ms Mildred, Sharon & Gary. My deepest sympathies in the loss of Mr. Lambright. Praying for you during this difficult time.

What a wonderful Papa! He left a great legacy for all to try to achieve. I know everyone of you will miss him tremendously. May God give you the comfort you need and rejoice in a home going of being in the presence of his Lord and Savior!

Praying for the family