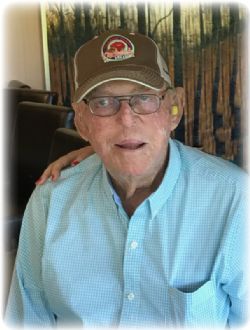 He is survived by one brother, Dick Mahan of Greenbrier, Arkansas, two daughters, Cissy Mahan-Lieblong and husband G.L. Lieblong of Scottsdale, Arizona and Teresa Mahan-Barry and husband Matt Barry of Cabot. One daughter- in-law, Linda Adams of Marshall. He is also survived by his cousin and best buddy whom loved dearly, Nicky Mahan of Martinville, Arkansas.

He is survived by many nieces and nephews and cousins whom he loved dearly. Family meant a lot to him.

Bill was a faithful member of the church of Christ since a young man and served as an Elder for many years at the Martinville congregation which his father established. He believed firmly in God and his son Jesus and his greatest hope was to spend eternity in Heaven.

Bill lived in Martinville almost all his life. His family lived briefly in Wooster when he was a small boy. He finished 8th grade from the School in Martinville. He left at the age of 14, and signed up to work in a CCC camp during the depression in Custer, South Dakota near Mount Rushmore. He briefly went to Alaska around 1943 to work on the Alaskan Highway and then followed his sisters to Flint, Michigan in 1944 during WWII working for General Motors building tanks for the Army. He left that job to drive his sister and her four young daughters back to Arkansas in December of 1944. By leaving his job building tanks, he lost his exemption from serving, so he was told to report for duty upon his arrival in Arkansas. He joined the U.S. Navy and was sent to Camp Pendleton, California. He was assigned to the USNS Cohoctan and served in the Pacific theatre during World War II and went to Japan, where he was when the war ended in June of 1945. When he returned home after the end of the war he met his wife Rose Morgan Morris of El Paso, Arkansas who was then living with her maternal aunt, Mildred Morgan-French and her husband (his maternal uncle), Quinn French. They married when he was 22 and she was 16. Together, they went to Flint to live with his sister Helen and work for GM in the early 50's, as jobs were scarce in rural Arkansas.

He returned to Arkansas around 1953 and opened a TV repair business in Conway with Max Cotton. He later became a Game Warden with the Arkansas Game and Fish Commission along with his cousins, Charles and Slater. In 1963 he became a Rural Letter Carrier out of Damascus, Arkansas, where he worked until his retirement in 1984. Upon retirement he continued to do the things he loved most-spend time with his family, fish, hunt, trap and grow his garden and a melon patch. He also was known for his strawberry jam and coconut pies.

Bill was a man who loved the outdoors. He was descended from men who were hunter gatherers, men who in this day and age would be called survivalist- men who could trap, hunt , fish, barter and plant to provide for their families. He spent many hours of his life with his cousins and other family members enjoying these activities. He loved to be outside. He had a thirst for knowledge and was a well read man who could carry on great conversation on about any subject. He was equally at home carrying on a conversation with a statesmen as he was a farmer.

He had many adventures with his cousins, Charles, Alon, Jennings (Slater), Hilma and Hayden Mahan and Howard Knopp and their sons, doing the things they loved so much. He also had many wonderful times with his wife Rose and friends James Don and Joyce Lucas, Marvin and Ruby Sams, and his niece Joann McMillen and her husband Sug.

Bill loved his family very much and was able to live long enough to know his youngest two great grandchildren, Crosley and Saylor. He delighted in the time he spent with them.

During his life he saw the world change drastically in ways no one could even imagine when he was a boy. His life was full with much love given and received from family and friends. His family rejoices he will suffer no more here on earth, and in the promise that he will forever be with those he loves throughout Eternity at the throne of God.

Visitation will be held at noon, Friday, September 28th, with funeral at 1 p.m., both to be held at Roller McNutt in Greenbrier, Arkansas.
His service will be officiated by Clint McBryde. Pall Bearers will be his grandsons, Brad Lieblong, John Lieblong, Matt Mahan, Ryan Barry, and his grandsons-in-law, Brett McMillon and Darian Stribling. Honorary pallbearers are Nicky Mahan, Tim Mahan, Denny (Tink) Mahan, Gary Lucas and Terry Lucas.

Interment will be in the Martinville Cemetery next to his beloved wife, Rose and among the many family and friends he has known all his life.

In lieu of flowers, the family requests donations be made to the Alzheimer's Association.

To the Mahan Family,
All of you are in my prayers. Remember all of the great memories you have with him.

My thoughts and prayers are for the family of such an amazing man. I feel I knew him even though I did not. Rest in peace Mr. William Thomas Mahan;

Cissy and all your families, so sorry for your loss, know your Dad will be missed. But he is no longer suffering and not able to hear that well. He has a new body, whole and complete! Praising God for a long lived Christian life by your Dad, reunion time with others already there, will be waiting for all the rest of you to join them. What a great day that will be. You are all in our thoughts and prayers.

Prayers for the Mahan family during their time of sorrow. Although I haven't seen Mr. Bill in a long time, I know many of his relatives, friends, and family. Mr. Bill will be missed by many!! Can you imagine the smile on his face when he saw his Rose in heaven? May God wrapped his loving arms around each of you & give you comfort & peace.

We are sorry for your loss Teresa and family. He was an amazing man and your devotion to your parents was exemplified by the wonderful care you gave them. God bless you and your family. We love you!!

Always in my heart and always with him with love

may God bless your family Cissy

Bill was a stalwart in the Martinville community and church and will be missed.

Prayers and hugs for one of my favorite families. I love you all
So much.