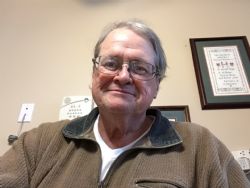 A funeral service for John Fewkes will be held at 12:00 p.m., Thursday, April 14, 2016 at St. Luke Missionary Baptist Church in Dundee, Mississippi. Visitation will be Wednesday evening from 5:00 p.m.-7:00 p.m. at the funeral home. Burial will be at Maple Hill Cemetery in Helena.

Our deepest sympathy to John's family. May he rest in peace.

My mother, Peggy Alderson, worked with John at Pillowtex.They were good friends. On her behalf, we extend our deepest sympathy to his family

Our extended family will always think of John as part of our family. Some were surprised to find out he wasn't. A wonderful man who brought joy to so many through kindness, caring, sharing, music, poems, writing and telling great stories. Whether it was fireworks at a World's Fair or a lightening storm on a Colorado mountaintop, his enthusiasm for life, his love of words and the "roar of the crowd," he was bigger than life. We'll miss him, and will keep Edna in our thoughts and hearts.

John was one of the most interesting, kind, patient man I have ever had the privilege to call my friend. I will cherish his memory always.

We loved John very much and so glad to have his original artwork on our walls in the office. We had many great discussions and he was so kind to everyone, including our family. We will miss you very much John. Thank you for all you did for us. Farewell brother. Kevin, Sissy, Drew, Nate, Virginian and Caroline Smith