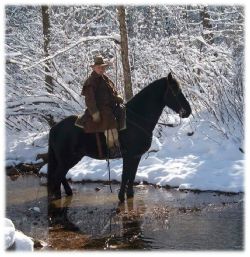 Raymond Powell, 72 of New Blaine, Arkansas passed away on April 2, 2015 in New Blaine. He was born on October 17, 1942 in Paris, Arkansas to his parents John Wesley and Agens (Williamson) Powell. For several years Raymond worked in the Oilfield and was still working as a Horse Farrier. He attended First Assembly of God Church in Paris.

A Memorial Service will be held at 2:00 p.m., on Tuesday, April 7, 2015 at First Assembly of God Church in Paris. Cremation arrangements are under the direction of Roller Funeral Home.

Honorary pallbearer will be all of his horse riding buddies

May God give you comfort & peace during this difficult time. Prayers for the family.

Well, I have known Raymond for years , worked with him in the oil field whin I was a kid.. He thought me a lot and kept me laughing.. Sure going to miss him.. Raymond Allen praying for y'all .. Love Ya Brother!!

You will be missed dear friend. Love you.

To the Powell family,
We are so sorry for the loss of Raymond and our prayers are with all of you!
Terry and Relda Williamson

Raymond was a dear, sweet man who took care of my horses from when I was just a little girl. I sure will miss his hugs, his smile and his stories. May God Bless and comfort his family.

So sorry to hear of Raymonds passing our prayers are with the Family. Mike Dede Pettigrew, Dylan Odom

Our thoughts and prayers are with Raymond's family at this time, may God bless them and keep them in his loving embrace through this time.

Our lifelong friend Raymond, will truly be missed. His loving heart will always be with us. As we look around we see everything he touched and the love has he shown.

God Bless your family, our thoughts and prayers are with them.

Our thoughts,prayers and love are with you all during this time.

Raymond was a good friend to our family. He always had a story r two to tell me about my dad when they were all younger. Raymond our animals especially Jazzie our mini donkey will miss u coming to work on her feet. Heaven has gained such a kind hearted man. You will be missed by many. Rest in peace.

Thoughts and prayers for the family, Raymond was a good friend always had a story to tell. He will be missed. James and Cheryl

So sorry for the loss of your loved one. He was a friend to everyone

Raymond was a great friend to our family. A pleasure to have known him. Prayers and love to his family. He will be missed.

You will truly be missed uncle Raymond. You was truly a good man.

Heaven has sure gained a precious and true cowboy. You are going to be missed by so many. We are blessed to have been friends. There will always be Hammer stories..Prayers for your family

Our thoughts and prayers are with the Powell family. Raymond was a sweet and dear man that will be missed.
God Bless!

Raymond Powell was a good man. Can't remember him not having a smile on his face. He was a simple man, worked hard, loved his horses, and respected the world God gave us. I am sure he and Toby are doing some catching up. Raymond, you will be missed so very much.... Valerie

You sure taught me a lot about horses, I am sure gonna miss your jokes and your smile!! I know you will be up there looking down on all of us keeping us safe!! God Bless!! You were definitely a true Cowboy!!

Raymond, your laughter, friendliness, and quit wit will be missed. Heaven has gained a great man!! Your family will be in our thoughts and prayers.

Raymond will be truly missed. Many times he's brightened our day with is friendly, outgoing personality and loving heart.

Our thoughts and prayers are with the Powell Family. So sorry for your loss.

My thoughts and prayers are with your Family

Raymond was a lifelong family friend, a lot of people in Logan County lives have been touched by his kindness, will miss Raymond cutting up with us at the round table at The Dinner Bucket! Rest in Peace Our Friend!

I am saddened to hear of the loss of Raymond. My thoughts and my prayers are with the family.
Paula Turner-Wiley