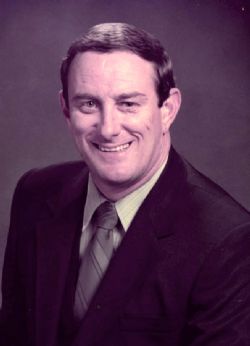 He was born at Batesville on November 12, 1942 and was the son of Russell and Alice (Linebarger) Stewart, who preceded him in death.

He is survived by his wife of 37 years, Paula Brent Stewart; his sister, Sandra Stewart Jenkins and her husband, Bill Young; his nieces and nephews, Derick Jenkins and wife Sharon, Amanda Jenkins Cothren and husband Russell, Josh Jenkins and wife Katie, Laura Jenkins Caldwell and husband Justin, Melody Cagle Qualls and husband Bo; and eight great-nieces and nephews. He is also survived by his favorite dog, Toot, and Chocolate, Julie, Pumpkin, Chevy, Sweetie and Deamer; and his cats, Bo Diddly and Little Bo.

Gene was deejay and news director at KBTA in Batesville and KCON in Conway, then the "Mighty 1090, 50,000 watts KAAY in Little Rock," where he was Gene Stewart to music fans and Frank Woods, news director to Comex News.

Early on, Gene developed a keen interest in police, fire and emergency work and flying. He was a firefighter for the Batesville and Conway fire departments and a first responder for the J&J Ambulance Service of Conway.

Gene was a graduate of the Little Rock Police Recruit School No. 25. He was the police and fire reporter, a producer, writer and news editor for Eyewitness News 4, KARK, and a reporter for the Sky 4 Eyewitness News helicopter. In 1977, Gene left Channel 4 to accept the job as patrol sergeant and information officer for the Pulaski County Sheriff's Department. For several years, Gene flew the daily traffic watch over Little Rock, North Little Rock and Pulaski County in all types of weather. The reports were carried on several Little Rock area radio stations, and "Sgt. Gene's" air traffic reports were depended on by thousands of motorists.

In the 1980s he went back to his police reporting job at Channel 4.

Gene was also a former news director of the WRD Entertainment group of radio stations.

At one point Gene was selected as police officer of the month for a unique program he designed, making it easier for emergency personnel to obtain medical information about a patient at the scene of a medical emergency. The information was placed in a container called the "vial of life" and was put in a common spot in homes.

At one time Gene had more than 50,000 of the vials in homes and businesses in the central Arkansas area. They were actually plastic vials, parts of equipment donated (recycled) by the V.A. Hospital. This turned out to be one of the early recycling programs.

He once was selected to produce a music program with Jimmy Driftwood featuring Mountain View "mountain-type" music. It was played around the world on the "Voice of America." Gene was a local reporter for the Associated Press and United Press International.

Gene was selected to fly to New York and, with a group of reporters and dignitaries, met the Concorde Supersonic Jetliner when it flew in from England and flew back to Arkansas on it, documenting the flight on video for a travel agency which sponsored the trip.

While working at KARK, Gene founded Gene Stewart Video, a tv news clipping, media tracking and video production service. At the time of his death, he was working on plans for an internet radio station.

It was Gene's wish to be cremated. At his request, there will be no visitation and no funeral service.

Memorials may be made in his memory to the Humane Society of Independence County, PO Box 3477, Batesville, AR 72503

Arrangements are by Roller-Crouch Funeral Home of Batesville.

Happy Trails dear heart. The world has lost a good friend and so have I.

I will never forget you buddy and " I will save the last dance for you."

See you on the otherside Mr. D.J.


My best to you Paula.

Paula and Family, I was shocked and saddened to her of Gene's passing. I had just re-connected with my friend on FB and enjoyed his posts. Please know I will keep you and the family in my prayers during this difficult time. Janie Weaver Prichard

So sorry to hear about Gene. I didn't know him, but I know you will sincerely miss him.
I've known you for a long time and enjoyed living next to your mother and dad.

Again, I am truly sorry.

RIP my dear friend of 39 years. Go rest high on that mountain.

Paula fond memories of you both back in the Shiloh Subdivision days.
Sorry to hear of Gene's death.
Fonda Courtney Ayers

Paula and Sandy,
Words can not express the sorrow I feel. Gene was a kind friend to all. I will miss him, especially his smile. I am proud to say I knew him. Love to all of you.

Paula,
I'm sorry to hear of Gene's passing. Blessings and prayers to you If you need anything please don't hesitate to call me. God bless.

It was so sad to hear that you lost Gene. My prayers go out to you. Please be strong as we all must one day be called the way Gene was called. I hope you hear from other former Entergy co-workers. In my heart, we were all family.

I haven't seen you in so many years, and it looks like you accomplished a lot in that time. Your life was too short, old friend. May your legacy live on.

Paula, we are so sad to hear of Gene's passing. You are in our thoughts and prayers.

Sandra, sorry to hear of Gene's passing. May The Lord comfort you now and in the days to come.

It was a blessing to have known Gene as a friend and 1959 O.T,H.S classmate. I was always reminding Gene that he was the "Baby" youngest in our class. He usually came back with I didn't know I was that much younger! Which closed that subject immediately. So many fond memories of the school years at Oil Trough School. Thanks to Gene for a video of old school pictures for our 50th reunion. Visting with Gene showed his enjoyment of Life, Family and Friends. May God give comfort and peace to his family and friends in this time of sorrow. He will be missed.

I was shocked and saddened to hear about Gene's passing. I will always remember him as a good friend and a good person. We really enjoyed spending time talking to him at the last meetings we had with the Class of 59. He won't be forgotten.

The world was a better place with you in it! God Bless You!

RIP old friend. Prayers for the family. I worked with Gene at KARK. I always loved talking to Gene and hearing his stories. You will be missed.

I was shocked and sad to read of the passing of my old friend, Gene. While in high school in the late 60s, I spent allot of time at KBTA with Gene. He was a kind man that will be missed by anyone that every knew him. May God grant peace to Gene's family and friends during this time of sorrow.

Dear College friend!
Was in his Donaghey Ave home in Conway many times in the 60's. He will be missed!
May God Bless his family...

Sandra,
So sorry for your loss. Wanted you to know we were thinking of you during this time. Jerry and Brenda Davidson

So sorry to hear about Gene.
We both graduated from Oil Trough in 1959. He was a good friend on facebook too. I enjoyed reading his postings.
Sending prayers to his family. Mary

Paula - we are thinking of you and sending our love and prayers!

Dear Family
I was shocked and saddened to learn of Gene's
passing. I attended school at Oil Trough with
him.. He got into trouble many times for kidding
around and playing jokes on others. Isn't it just
like him to leave us on April Fool's Day?!!
My thoughts and prayers are with you!
Pat

he will be missed

With deepest sympathy, thoughts and prayers.

May God give you comfort & peace in the loss of your loved one, Gene. He was such a remarkable man with a wealth of talents. His generosity for his fellow man & "little critters" will be remembered by all who knew him. My prayers are with you.

So sorry Paula, Sandy and Family to hear of the passing of Gene. I can feel your pain . May your wonderful memories of this dear man be a comfort to you. You all are in my thoughts as you go through this very hard time.Thinking of you, Toni

So sorry to hear about the passing of Gene. My first job out of college was for Gene in 1994 in Little Rock. I'll never forget the opportunity he gave me, and the passion for the video production and broadcast monitoring industry that he helped create in me. Paula, you and your family are in my thoughts and prayers.

So sorry for the loss of a true southern gentleman. I have many wonderful memories of Gene.

went to college with Gene at uCA and he also did some video work for us after I moved back here. He will be missed greatly. May the Lord be with all of you during this very difficult time.

Paula,
Gene will be missed by a lot of people. Our prayers go up for you.

Just wanted to let Gene's family know what a great and gentle man Gene was. He was loved and admired by many, I am proud to say that I an one of the many that concidered Gene a friend. He was always so helpful and kind to our family. He will be missed.

So sorry, keeping you in our thoughts and prayers.

Gene you were a lot bigger spirit than we knew. Bless you on your new journey

Paula,
I am so sad for you. When I spoke with you just a few days ago, I had no idea that Gene would be gone by now.

Please know that I will continue to remember you and those close to you. You and Gene Stewart Video Productions have become significant to me and to our museum.

My very best wishes to you as you grieve and find your footing for the future.

Sadden to hear the lose of Gene. He was such a wonderful, friendly person and will be missed by so many. My thoughts and prayers are going up for the family. With love & respect.!!

Paula - my prayers are with you. Let me know what I can do to help, anytime.

It's with a heavy heart that the staff at KARK learns of Gene's passing. We send our thanks to Gene for his years of service to the station and also our prayers to his family.

Paula, We will be praying for you today and in the days ahead.