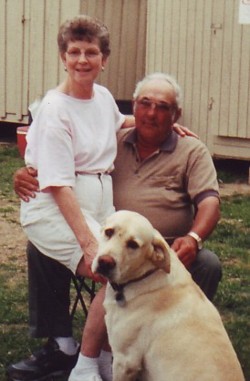 I AM SO SORRY TO HEAR ABOUT YOUR LOSS. MY THOUGHTS AND PRAYERS ARE WITH YOU ALL DURING THIS DIFFICULT TIME.

Suzanne I just wanted to say that I'm so sorry for your loss. Your family is in my prayers.

Donna, please know that I'm thinking of you and your entire family at this difficult time!

Please know that I have you in my thoughts and prayers at this time of sorrow for the Lynch family. With deepest sympathy. Gerry

Bubba's death leaves a real void in our hearts. We lived on adjoining farms most of our lives and spent so much of our childhood together...Bubba, Jenny Ann and me. Donna was 'our little sister'. Love to Sue and family. I hope you have many wonderful memories.

We send many thoughts and prayers along with our sympathy to the Lynch family during their time of sorrow. May you find peace and comfort during this trying time.

To all of family of James Earl Lynch, I send my heartfelt sympathy and prayers. I pray God will strengthen you during this sad time. Please know that you are in my thoughts.

To all of family of James Earl Lynch, I send my heartfelt sympathy and prayers. I pray God will strengthen you during this sad time. Please know that you are in my thoughts.

Aunt Sue, Jim, Jeff, and Suzanne, Wish that we were closer so that we could come by and pay our respects to Uncle Bubba...I have fond memories of him and his gravelly voice and scratchy whiskers...he reminded me a lot of Granddaddy. We are praying for you all and hope that the peace of our Savior will touch your hearts and help you through this time of loss. Remember though, it's just an earthly loss, and that one day we will see each other again! Tell "Aunt Nonna" to give you all a big hug from me. I love you all and wish I was there.

Sorry to hear about Bubba,s death, We haven,t seen each other in several years, but he was a great friend of my when we were growing up.