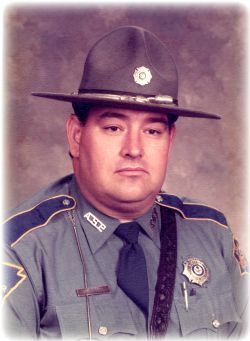 In 1966, he graduated from Bradford High School. On March 17, 1979 he married Valery Graham and they were married 39 years. He was a wonderful son, husband, father, grandfather, and friend. He was a Sergeant in the USMC and served from 1967 to 1973 with two of those being in the reserves. He was awarded the Purple Heart and the National Defense Service Medal among several other military medals. Larry was an LPN after the Marines and before he joined Arkansas State Police where he earned the rank of Corporal. During his service from 1977 until his retirement in 1999 with the ASP he received numerous medals and commendations.

His hobbies included hunting and fishing. He was also a voracious reader and would read any and all genre.

Left to cherish his memory is his two daughters Rebecca Long and husband Scott of Winder, GA, Tessie Mitchell-Vest and husband Scotty of Judsonia, AR, his niece Hope Wiggins of Deerfield Beach FL whom he considered his own, his 2 brothers Leroy Mitchell and his wife Noma of Bradford, AR and Paul Mitchell and wife Linda of Searcy, AR his three sisters Gwena Sandford and husband R.A. of Bradford, AR, Nina Mayhue of Bradford, AR, and Cathy Blevins and husband Danny Blevins of Newark, AR, his sister in law Shirley Mitchell of Velvet Ridge, Ark, his grandchildren Kelsey Long of Oakbrook Terrace, IL, Jacob Long of Buford, GA, Mitchell Long of Winder, GA, and Seth Mitchell of Judsonia, AR and numerous nieces, nephews, cousins, and friends.

Visitation will be held November 6, 2019 from 1pm to 2pm at Roller Daniel Funeral Home in Searcy,AR with memorial service to immediately follow with Bro. Danny Blevins officiating. Inurnment will be at White County Memorial Gardens.

In lieu of flowers donation can be made to St Judes, Wounded Warrior, or Marine Toys for Tots.

Tess, I am so sorry for your loss. I am praying for you and your family. May the Lord wrap
His comforting arms around you and grant you peace.
Love ya, Sha

Our sympathy and prayers are with you.

Back in late 80’s Larry was known as Mad Dog Mitchell (B21). I was a rookie at SPD and got tagged as Mad Pup by a Searcy Attorney. After court I explain to the attorney that, that was the nicest thing anyone had ever said to me. Love ya brother, you will be missed.

Prayers are with you all,remember all the times I watched Tessie.love to you all.kathy and family

I new Larry back when we worked at White County Hospital. Always concerned him a good friend. I know he will be missed.

Larry lost his Rat Terrier,when our granddaughter was 8/9.We found it and kept it till we found out it was his.During the time our granddaughter fell in love with the dog.So when he came to get dog,She cried & cried.Dog went home,But the second day here came Larry with cage,food & bowls.Gave the dog to our granddaughter.Told her ,She didn't have to cry anymore. The dog was w/ her for 17 yrs.We will never forget How SWEET that was.He was a SWEET man.

Larry was a one of a kind....gave me my first speeding ticket, lol
Did his job by the book. But had a way about him that after he got done writing you your ticket, your thanking him for doing so.lol
So much respect for this man.
RIP MAD DOG MITCHEL...YOU WILL BE MISSED BY MANY

Family; Larry was a classmate with us in Bradford and we have remained friends as a medical person and as an officer. Never have we heard him say he had a bad day ,had challenges but was still very positive. Thoughts and prayers Mary and Johnny Hodges

RIP, B21..... had some good times and great conversations!! Saturday nights at WCSO with you and Vernon were always an adventure!!! Rest well, my friend.

Someone I always looked up to, respected and admired. He was one of my dads best friends. He will be missed and never forgotten. A great guy and someone you could always count on. God-Bless my friend. Semper-Fi.

As much a modern John Wayne as there ever was. I learned a lot from you. Prayers to the family.

One of the best men I had the privilege of working with. Rest in peace Mad Dog. B 21