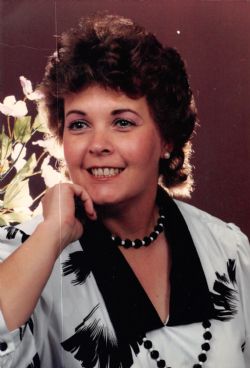 Muriel Marie Claire (Jean) Kilbride, 76, died peacefully
with family at her side on June 27, 2020 at her home in Mountain Home, AR.
Muriel was born at St. Mary's General Hospital in Lewiston, Maine on January
31, 1944, the daughter of Leon R. and Rose A. (Veilleux) Jean. She received
her first communion at Sacred Heart School and graduated from Edward Little
High School with the Class of '62-the first graduating class of the then "new"
high school.
While working at Mac's variety in Auburn she met Richard J. Lachance. The
couple married in 1963 and had three sons, Marc, Stephen and Michael
whom they and raised together until 1975. Over the next two-decades Muriel's
perseverance and dedication to her three sons became evident as she led
them through times of hardship, adventure, and life-changing turns.
Muriel loved to sing and was a fan of many genres of music. She enjoyed
sewing, collecting, travelling, reading and cooking. Her culinary skills were
renowned, and even as a young wife and mother her meals were truly
extraordinary. Muriel also loved to entertain, hosting many successful
Thanksgiving and holiday feasts for friends and family alike.
In 1986 Muriel met Thomas Kilbride and they married two years later. Muriel
and Tom were inseparable until his passing 22 years later. They lived in
Arizona for many years but retired to Mountain Home, Arkansas.
Muriel was predeceased by her husband Thomas J. Kilbride, her parents, and
her brothers Marc, Al and Louis Jean. She is survived by her sons Marc R.
Lachance and wife Dianne of Perth, Australia, Stephen T. Lachance and wife
Robin (Brashear) of Buckeye, AZ., Michael R. Lachance and wife Kristy
(Davenport) of Lewiston, ME., sisters Nicole Rogers of Mountain Home, AR.,
and Carmen Smith of Lewiston, ME., grandchildren Haley Roderick, Ashley
(O'Brien), Heather, Justin, Andrew, Carrie and Garrett Lachance and greatgrandchildren Autumn and Emberly Lachance.
Funeral service was held on June 30, 2020 at Roller Funeral Home, Mountain
Home Arkansas. Donations in her name may be made to the Travis Mills
Foundation, https://travismillsfoundation.org.

Ms Muriel, you was such an amazing lady, I am so sorry to hear of your passing, but at least I know you and Tom are together, prayers for your family and your grandkids,HISC has definitely lost an amazing caregiver as well, RIP Ms. Muriel

So sorry for your loss. Muriel was a good neighbor to my son and myself for many years, she was friendly with many stories to tell and had a beautiful smile. She will be missed. Praying for your family!! 🙏🏻