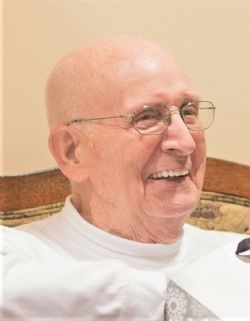 Samuel James "Jim" Fielder, age 86, of Little Rock transitioned from his earthly home to his forever home on October 30, 2019. He was born in Guy, AR on August 11, 1933, to Dewey and Hester (Perkins) Fielder. He was a beloved husband, father, grandfather, great-grandfather (affectionately known as "PawPaw Jim"), friend, and pharmacist.

He graduated from the College of Pharmacy at the University of Mississippi and was a lifelong Ole Miss Rebel fan. He served the communities of Osceola, Wynne, and McCrory, AR as a pharmacist for over 50 years. As the owner of Best Drug Store in McCrory, he served not only as a pharmacist but a trophy-maker, jeweler, photographer, and framer. He was a member of the Church of Christ and faithfully served as an elder in McCrory for many years. Above all, he loved Jesus and demonstrated that love through his compassion and generosity for his family and others.

Visitation will be Saturday, November 2, 2019, at 1:00 p.m. at Roller Daniel Funeral Home in Searcy, AR with the Memorial Service immediately following at 2:00 p.m. Burial will follow the service at White County Memorial Gardens. In lieu of flowers, memorials may be sent to Searcy Children's Home, 208 E Moore Ave, Searcy, AR 72143.

We send our condolences to your family. Jim and Dorothy and the family were so kind to us as elder and fellow Christians the twelve years we lived in McCrory.