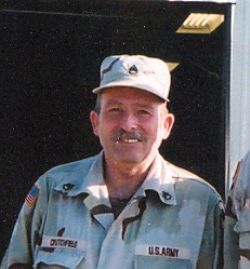 Mr. Frederick Glenn Crutchfield, 63, of Hartman, went to be with the Lord due to an accident at his home, Wednesday, February 4, 2015, in Hartman. He was born September 20, 1951 to Ned and Gelletta (Burgess) Crutchfield.
Glenn served in the Army National Guard for 30 years, was an Iraq war veteran and was very patriotic. He worked at Greenville Tube for 36 years; was a member of Stillwell Bible Baptist Church and the V.F.W., American Legion. He loved travelling, camping, and could make something out of anything. Everyone loved Glenn and he had a special wave all his own that he gave to everyone.
Mr. Crutchfield is preceded in death by his father. He is survived by his wife, Jane Crutchfield of Hartman; mother, Gelletta Crutchfield of Clarksville; daughters, Amanda Crutchfield of Topeka, KS, Chris and George Ozdinski of Livermore, CA, Denise and Davy East of Clarksville, Brenda and Pat Smith of La Grande, OR; sons, Eric Crutchfield of Topeka, KS, Rodney and Serenity Crutchfield of Altus, Jerome and Brandy Butler of Coal Hill, Trevor Butler of Coal Hill; brothers, Hartsell Crutchfield of Knoxville, Rodger Crutchfield of Lamar; sisters, Judy and Robert Millsaps of Russellville, Rebecca Pachaco of Little Rock; sixteen grandchildren; five great-grandchildren; numerous nieces and nephews.
In lieu of flowers the family has requested donations be made to an account setup in Glenn's name at Arvest Bank.
Visitation will be 6:00-8:00p.m., Monday, February 9, 2015 at Roller-Cox Funeral Home Chapel. Mr. Crutchfield's funeral service will be 10:00a.m., Tuesday, February 10, 2015 at Stillwell Bible Baptist Church with Rev. Jim Goodman officiating. Burial will follow in Adams Cemetery. Steve Felkner, Tom Pearson, Al Tillman, Kerry Sears, Kenny Lederman and Donnie Stumbaugh will be serving as Pallbearers. Honorary Pallbearers are Jim Hill, Andy May, David Laster, and Jared Rohr.
Arrangements are under the direction of Roller-Cox Funeral Home (479) 754-2201. Online guestbook www.rollerfuneralhomes.com

Glenn was a friend to all. Your loss is our loss. Our prayers go up for your family.

Sgt Crutchfield you were an awesome Soldier and always supportive of us Cooks out in the field and in Garrison. God be with You now throughout all Eternity. RIP Soldier!

Gone but not forgotten. It was a honor to know you and serve with you. You will remain in the hearts of many and be cherished for eternity.

It was an honor to serve with Sgt. Crutchfield and I am proud to have known him.

So sorry for you loss. Prayers going up.

As you grieve know that we are remembering you and honoring the memory of SSG Frederick Glenn Crutchfield A Brother in Arms who served his country and by doing so became a Great American Patriot. I salute you Sir.May loving memories sustain family and friends during this time of loss and may you find comfort in Gods word.

So sorry for your loss. Praying for the family .

It was an honor to know and serve with Glenn! Sorry I can't get there but him and his family are in my prayers

sorry for your loss

Jane, I am so sad to hear of Glenn's passing. May God wrap his loving arms around you.

All our love and prayers to you. Steve, Robin, Mackenzie, and Justin

Very saddened at your loss. I pray that God will give comfort and strength to your family.

We are so sorry to hear of Glenn's passing. Our hearts go out to Jane and the rest of the family. May God comfort you all as only He can. Love , the Harry Smith Jr. Family. .

My prayers and thoughts go out to you. I knew Glenn when we were both students at Lutherville School and did not see him for many years until the Lamar School Reunion a couple of years ago. I always thought he was a very nice and kind person.

Our thoughts and prayers are with you.

Jane, we love you and are so sorry this has happened. We loved Glen and we were always happy to see that smile every Sunday and Wednesday night! He was a great person and we will all miss him. Our prayers are for you and the family.

Debbie and Andy May

Glen was one of the sweetest men I ever knew. Andy spent a lot of time with him in the Gaurds and he has been deeply saddened by this loss. We pray God will be with Jane and the family and give them peace and strength. God bless.

My OutLaw. Have missed you in the last 2 years at the reunion. Please watch over Jane from Heaven and keep her safe. Love you.

Dear Jane and Family: My heart feels so sad for you at this time. Love and Prayers coming your way.

I am so sorry to hear about Glenn, he was a great man and he will be missed dearly. Prayers to Jane and the family.

I have known Glen for about 17 years. He was my daughter's father-in-law for about a year in 1998-99. He was always so nice and kind. He was pleasant to be around and easy to talk to. My heart and prayers go out to his family at this time. May he soar with the angels up in Heaven.

Glenn is a man that I considered a friend. We may not have hung out together but I've know him for years. When I was at Warehouse Sales him and Jane would stop by and buy a few things. One of the last times I remember seeing Glenn was up at the Lutherville Old school house for the school house reunion. We all had a great time. Glenn will be missed by many.

Sorry to hear about your loss. Praying for peace & comfort.

So sorry to hear about Glenn. Most of my time with him was in the National Guard . Over the years I came to know Glenn as a good friend.