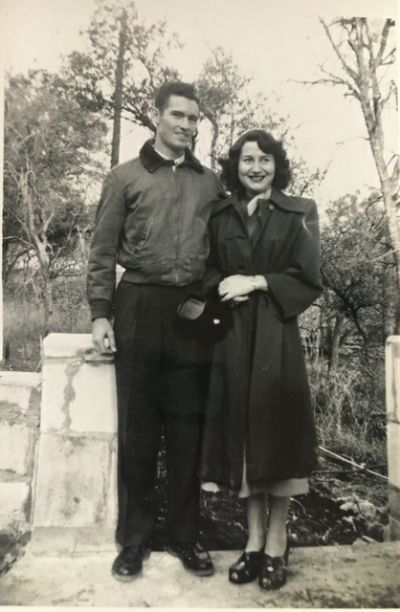 Billie Thomas Daniel, age 91, passed away peacefully on Wednesday, April 27, 2022, surrounded by family at her home in Flippin, Arkansas. She was born on July 19, 1930 in Memphis, Texas, the sixth daughter of W.O. and Stella Thomas. Her father was a farmer and kept hoping they would eventually have a boy to help with the workload. When they realized Billie would be the last child, she was named William Wilson, after her father and grandfather. But her father said, ''We'll call her Billie''.

As her husband completed his degree in petroleum engineering at the University of Oklahoma in Norman, Billie worked in various departments on campus, such as food service, faculty childcare, and clerical work for housing and administration. While Gene began his career, first with British American and then with Tenneco Oil, Billie became the home manager and ''domestic engineer'', specializing in packing and unpacking, as his work sent them to numerous states throughout the South and Southwest, including Texas, Louisiana, New Mexico, and Colorado.

They eventually had three children and as these moves continued, Billie remarkably arranged for new schools, churches, doctors, piano lessons, sports leagues and scouts with every relocation. She also made time for her own recreation and enjoyed her ladies bowling teams and Bible studies. Gene's work often took him away from his family, sometimes for weeks. He and Billie decided to make a change in order for him to be more available to their children, so he transferred to the US Geological Survey. In time, they landed in Billings, Montana as Gene took on his last assignment as the Deputy State Director of Mineral Resources with the Bureau of Land Management. At age fifty-seven Gene and Billie made their last career choice together. They made the decision to step into a different kind of adventure and take an early retirement.

When deciding where to retire they knew their hearts were back in the Ozarks. So, in the spring of 1986, with the help of their grown children, they loaded up all they owned and embarked on their final move, back to the log cabin Billie's father had built in the 1940s and the place of their wedding, the Thomas homestead in Flippin. During their retirement, and after remodeling their ''new'' home, they enjoyed fishing, bowling, golfing, bee-keeping, gardening and learning how to catalog the church library. Billie also became a Mary Kay skin care consultant and enjoyed latch hook rug making. They made several trips as well, often dropping in on their kids.

Billie and Gene had a good ten years together in retirement before their next chapter, which put them both to the test. Gene developed Alzheimer's disease and their world was turned upside down. But, just as in all of their moves, Billie jumped in and focused on the task at hand. It was during these years that Billie is known for her finest work as she learned to care for Gene and his needs as they changed, sometimes daily. She read every resource she could find on this devastating disease and adapted her home to create a space where Gene could safely live out his final decade. With the help of home health aides, nurses, church volunteers, neighbors and family members, Billie was able to accomplish her goal of caring for Gene all the way up until his final day. The love she exhibited for her husband was truly a rare sight to witness. At the time of his death, Billie and Gene had been married for fifty-six years.

Over the next fifteen years Billie learned how to go on without the love of her life by her side. Her family continued to be her greatest interest but she, eventually, also found herself in a world of dementia. As family and caregivers spent their days with her, and as her needs changed, her moods would ebb and flow. But her spirit never wavered. She faced her final days with courage and grace. Billie was an inspiration to her family and friends and became a source of strength in her community. Just as she had encouraged her husband, and then her son, in the last days of their illnesses, Billie was also comforted by family with reminders of what Heaven would be like and who she would be seeing again. Knowing her desire to be with Jesus, we can stand assured that although our hearts are broken, we will be with her in eternity because of Christ's provision through His death and resurrection.

A Celebration of Life officiated by Bro. Steve Martin will be held at First Baptist Church, Flippin, May 19, 1:00 pm, with a visitation for family and friends from 11:00-1:00.

Burial will follow at Flippin Cemetery under the direction of Pastor Aaron Lindsey.

In lieu of flowers, memorial donations may be made to the Library Ministry of First Baptist Church Flippin, or Elite Hospice.

Shelly and family,
We are so very sorry for the loss of your mother. From what was written about her, it seems she had a wonderful and long life. Please accept our condolences. You have our deepest and heart felt sympathy at this difficult time. It is never easy losing a loved one especially a parent. We are sending up prayers for comfort for you and your precious family.
Sincerely,
Dianna and Mike Roller

What a sweet Godly woman Mrs. Billie was. Her smile and attitude was contagious, she will be greatly missed. Prayers for you all during this difficult time.

May God give the family the peace that passeth all understanding in this time of sorrow. We love you all.

Beautiful reading…R.I.P.
My Condolences to Family and Friends

What a lady!
She and I will always have our road trip memories of Chinese food and stopping off at Willie's place in TX.