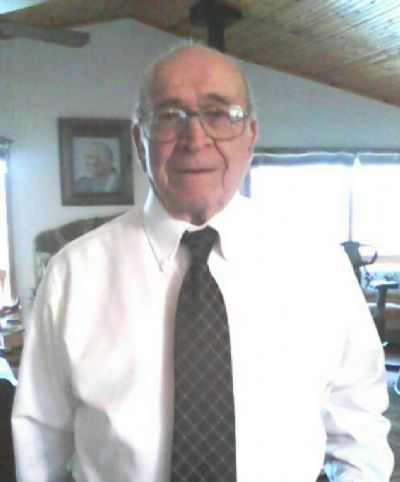 Monty Munsell, 98, of Yellville, Arkansas, passed away at home, surrounded by loving family.
A celebration of his life will be held on 03/23/23, on the land he loved and cared for.

Monty and his loving wife, Kathy, were married on December 24, 1991, in Bullhead City, Arizona. They resided in Kansas City, Missouri, before moving to the Ozark Mountains of Arkansas in 1999. Monty began building their home in 1997 and they moved into their newly built home permanently in 1999.

Monty loved gardening, caretaking their land, restoring classic vehicles, watching the Kansas City Chiefs, women's college basketball, and college football. In his younger years he coached basketball, baseball and raced go-carts with his children. Most of all, he loved his family unconditionally, and loved the land he and his wife, Kathy, lived on.

The family would like to thank Dan Hall, (Military/Veteran Liaison), Staff Sergeant Chance Wilkerson, United States Marine Corps, who visited the home before his passing, honoring his military service. We also thank Hospice of the Ozarks for their excellent and compassionate care during the last days of his life.

Private arrangements are by Roller-Burns Funeral Home in Yellville.

My heartfelt sympathies to Monty’s dear family. He was an amazing man and raised an incredible family. He will be missed but not forgotten!
Sending love and prayers to all.

I just heard of Monty’s passing. He touched my heart and the heart of everyone that met him. A kind and loving man with great humor.
One of a kind!

Wonderful father! I have great memories growing up with him as my Dad.

Good Marine, good father, good company, good man. He will be missed but not forgotten.

To my dear family. I am so sorry for the passing of a great man. He loved you all.
And we all loved him. He will be sorely missed.

Love and Prayers for healing to all.