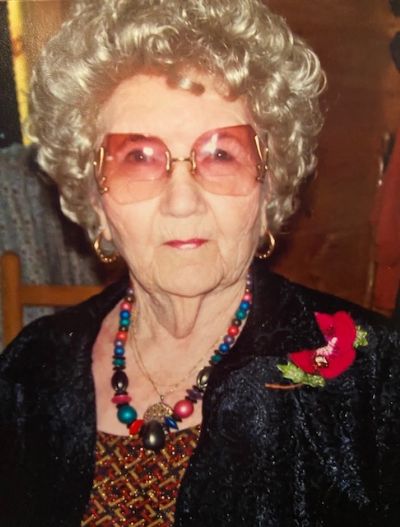 Norma Ethel Kiss, age 95 of St. Joe, Arkansas was welcomed into Glory on Thursday, March 17, 2022, at Maple Esplanade in Harrison, Arkansas. She was born in St. Joe, Arkansas on November 06, 1926, to Elbert B. Adams and Lucy Terrell Adams.

She was raised on her family's farm in St. Joe, Arkansas. She married at the age of 22 to William Glenn Thompson. In 1952 they moved to Anchorage, Alaska where she worked for Northwest Airlines and raised two children. On Good Friday of March 1964, the family survived the Great Alaskan earthquake with a 9.2 magnitude lasting 4.5 minutes. It remains the most powerful recorded earthquake in U.S. history.

Norma was of the Christian faith. She was baptized in 1972 in Spenard, Alaska after being led to Christ by her son. In September of that same year, she moved back to Searcy, Arkansas to care for her mother and returned to St. Joe, Arkansas in June 2000. Norma was a voracious reader, loved her family, loved her Lord and Savior, and will be remembered by her grandchildren for cooking the best biscuits and gravy breakfasts and Thanksgiving dinners and for filling their childhood summers with an endless supply of frozen strawberries.

Graveside services for Norma will be held at Tomahawk Cemetery in St. Joe, Arkansas.