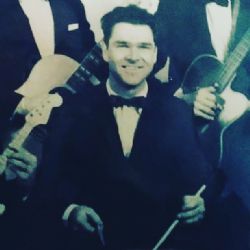 Odean Patton, age 85, of Harrison, went to be with the Lord Monday, September 21, 2020, after a battle with COVID-19. Odean was born December 8, 1934, in Pyatt, Arkansas, to Onus Patton and Lola (Lee) Patton. He was preceded in death by his ex-wife, Irene Patton; his daughter, Kathy Cooper; his sisters, Shirley Downs and Lena Neilson; his brothers, Layne and Wayne Patton; an infant grandson, Wester; and his son-in-law, Wesley Wester.

Odean was a member of Osage Assembly of God Church where he loved to play the drums in the church worship band. He worked in the cotton fields as a young man, became a lead supervisor for Pepsi Cola Company of Wichita, Kansas, was a proud partner of Stone Lumber Company of Harmon Arkansas for 40 plus years. Later after retiring, he enjoyed working for Wal-Mart for a few years in the paint department as needed. He was known for traveling in his music band all over playing the drums for events around Harrison and other close areas in the region. His favorite memories were hunting pheasant, deer, and bear, and spending time with family and friends.

Odean is survived by his daughter and her significant other, Pamela Wester and Danny Morrison; his granddaughters and their husbands/fiances', Laura Cooper, Lacey Kleeman, Greg Kleeman, Carly Tomlins, and Nick Liston; his son-in-law, Gary Cooper; his sisters-in-law, Donna (Boyd) Patton and Donna Ammerman Patton; his great-grandsons, Stephen and Levi Tomlins; his step-grandsons, Dominick Liston, and Braxton, and Laken Kleeman; his step-granddaughter, Savanna Kleeman; and a multitude of nieces and nephews.

Odean was a beloved father, grandfather, and uncle and maintained long friendships. He loved to laugh, talk about music, and his faith in Christ.

I will miss you greatly. The fondest memories are you playing the spoons.

Our prayers are with you during this time.