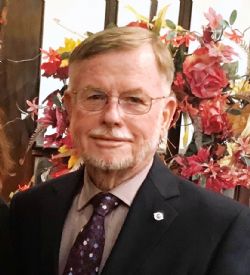 Richard F. Hart Jr., a child of God, went forth from this world to rise in the glory of his eternal home on Friday, September 11, 2020, at Hospice of the Hills House, after surviving three years with pancreatic cancer.

He was born on June 12, 1942, in Glendale, California. He attended school in Oakland where he created many friendships that have lasted a lifetime. It was one of those friends who thought it would be funny to set him up on a blind date with another redhead. As a result, Richard had his first date with Cova on November 4, 1960, and the rest is history. They were married on February 28, 1964, and were blessed to be by each other's side for 60 years.

Richard liked to say he started working in his family's monument business in Oakland, California when he was four years old, with his first job of sweeping floors. He eventually took over the family business, East Bay Monument Company, and continued to grow that business while Cova started her teaching career in Oakland's Chinatown.

In his early years, Richard developed an interest in cars and the speedway. He ultimately went on to test his race driving skills on the Bonneville Salt Flats and at other racetracks throughout Southern California. After the racing days of his youth, he continued to be a lifelong racing enthusiast. He was a great fan of both the stock-car racing of NASCAR and the open-wheeled Grand Prix excitement of Formula 1. He was a human rolodex of information about the drivers, cars, racetracks, and stats of both these motorsports.

Richard and Cova relocated their family to Harrison, Arkansas, an idyllic small town of six thousand, where Richard founded Hart Monument Company. They arrived from California amid a snowstorm in February of 1979; two girls in the back seat singing "Anywhere with Jesus we can safely go". However, no one knew they arrived safely because an explosion at the local phone company left the Harts without a phone for six months.

When Richard retired and sold his monument company, he turned his lifelong passion for racing and cars into a second career, touring the country as a vendor for hot-rod car shows. This allowed him to travel the U.S., coast-to-coast, with Cova (and sometimes the grandkids!) many times over. Richard and Cova were often assisted by his sister-in-law, Betty, while on their adventures with "Richard's Stuff". In addition to traveling the U.S., Richard and Cova took every opportunity to see the world including Europe, China, and Thailand.

When in California, Richard was actively involved with Optimist International, an organization focused on ensuring all children have opportunities to reach their full potential. Upon arriving in Harrison, Richard looked for an organization that shared his passion for service - especially to children. Richard quickly became involved with the Harrison Kiwanis Club and held all officer positions including President. Kiwanis has many fundraising activities in which Richard participated, with one such major fundraiser being a gun raffle. When you saw him walk through your door, you knew you would be buying at least one raffle ticket. He was consistently a leader and a ready volunteer, whether it involved selling pancake breakfast tickets, collecting donated items for the radio auction, or volunteering to park cars at the Boone County Fair. Richard has inspired many with his example of service and humility. Even while facing his serious diagnosis, he never stopped serving others and continued to ring bells for the Salvation Army and sell Kiwanis tickets for as long as possible. Richard is known to many for his service to others and his community in countless ways.

Richard was a devoted Papa to his four granddaughters, Addie, Catherine, Brynn, and Vivian. Each one of them was his "favorite". He imparted wisdom and advice to help get them through life's obstacles, and never missed an opportunity to make the moment special. Richard would spend the entire year planning for Christmas Eve when he would come up with an elaborate Santa performance to bring Christmas joy to the girls no matter their age.

Richard was a bit of a story-teller. A dear friend of his recently said "If there is "story-telling" in heaven, then there is a group sitting there wondering if Richard will ever get to the end of his story. He was the master of over-explaining his stories, but that was one of the things that made Richard, RICHARD!"

Richard was dedicated to the First Christian Church of Harrison and joyfully sang in the choir for over 25 years. He served as a deacon and elder. He was a devoted servant in every possible way to his church. Most importantly, he quietly served God by serving those in need. His was a life so well lived that it has lapped over to those around him.


A virtual memorial service will be held at a future date.

Richard, will be missed forever. Cova, may God gives you peace in your heart, going through this sad time.

I just saw this my heart aches for all of you. Richard was a nice guy. Cova my prayers are with you as this leaves a hole that will never be filled.
Hugs and prayers to all of you, he is resting in peace.
I will always love you beautiful girls, I know he was so proud of you.

Great man and a Wonderful Friend. We will miss him and his smiling face when we come to Harrison. I will miss those talks at the dinner table every year right after Christmas each year. We Love Ya'll and we know that God was at the gates of Heaven to welcome him in. See you soon.

Cova, was so sad to get the news on Richard. He fought the good fight, but GOD, needed him more apparently. So many good times with the two of you on the road. Problems, some really big problems seemed to never bother Richard, he would just smile and press on. I know he will be missed by a great many, he was the last of the “mold”! I will miss seeing him and hearing him tell his stories, some that seemed to last forever. You and the entire family are in our prayers, but we all know where Richard is and he is there healthy and for eternity and like Jesus did, he has just gone on to prepare a place for you to join him!

I had the pleasure of meeting your family while you stayed with me in Texas - your Dad going to M D Anderson. I felt like y’all were part of my family & your picture is still on my ‘Friends & Family table. Y’all have a special place in my heart, are fondly remembered, & Richard will be missed by many for years to come. Blessings to each of you. RIP

What a great man!! This world was blessed by his presence!! Love to all his family!! I loved this man so much!!

Sending our prayers and condolences to your family. I met Richard shortly after he opened Hart Monument. He was a great guy and we shared a love for all things automotive.

Oh Richard, I was so sad to hear that the Big C came back at you for a second go-around and that you couldn't shake it this time. Maybe it was just the Lord telling you that your body was worn out and that it was time to leave us and be with all of the friends that I'm sure were at the gates ready to welcome you. As Betty said "I'm sure Sue was there to greet you!" You lead a full life and had 60 wonderful years with that blind date:) Rest in Eternal Peace Sir. Till we meet again!

We are so saddened by the loss of such a wonderful man, as Richard. Our thoughts and prayers are with all of you. May God bring comfort.
Garry and Brenda Melton

We are deeply saddened by this loss to our community and your family. Mr. Hart was such a kind-hearted soul and loved doing things for others. He will be missed is so many ways, but I appreciate the difference he made in this community. I wonder who will fill his shoes — He’s left a big hole in our hearts and this community.

We have many special memories traveling with Richard and Cova and serving others on Mission Trips.

We also heard his gift of story telling in choir as well. A smile always comes to me when I think of Richard and his servant's heart.

Cova and family, you are in our prayers.

We were so saddened, and at the same time joyous, to hear Richard is now with Jesus. His race is over, and he ran in such a way as to win. We absolutely loved having you as neighbors as your beautiful girls grew up. Those were fun times that passed too quickly. Cova, you and RIchard were just wonderful. We were so blessed to have you across the street. May Jesus wrap His loving arms around your precious family and fill you with peace and joy during this hard time of loss. I hope when we all get to Heaven, your house will be next to, or at least across the street, from ours! We love you.

Cova, our deepest sympathy to you and your family. Richard was a wonderful Christian man and will be missed greatly. Thoughts, prayers and love to all of you.

I love this family! Richard will leave a hole in our community and I am so thankful to of known him. Blessings to each of you as you mourn his passing and also celebrate his freedom from cancer and the knowledge that you will all be together again...

I'm so sorry for your loss.....having worked at Shelby's for so many years, I feel I've known all of you forever.
Sending many prayers, hugs, and love.
Di
(Diana Rice)

So sorry for your loss. Richard and I were inducted into the Harrison Kiwanis Club at the same time (March, 1979) and have been friends ever since. His service to Kiwanis was significant and will be greatly missed.

To the Hart family, I have fond memories of Richard, doing many PTA Founders Day Dinners as well as other projects. He was a very pleasant man to work on projects with, always kind and considerate of others. He cared about the children in our schools. He loved his family very much. A good guy. Love and prayers.

What a great guy Richard Hart was. Always willing to help anyone. In whatever he was involved in, Richard always made an effort, which will always be remembered and respected by me. Richard had an wonderful ability to be sensitive to the needs of those around him as well. True servant leadership. He impacted my life in a positive way for sure.

Always enjoyed visiting with Richard at Kiwanis. He will be missed by all who knew him. Prayers for the family.

A Great Servant of Our Lord and Savior. Rest In Peace Richard Hart. You have most certainly earned it.