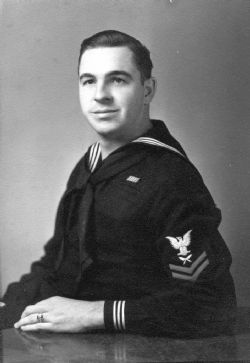 Edward "Elmer" Griever, Jr. went home to be with his Lord and Savior on Monday, July 27, 2020, at the age of 98, at Somerset Senior Living in Harrison. Elmer was born on December 16, 1921, in Arkadelphia, Arkansas, to E. E. Griever, Sr. and Myrtle Belle (Aaron) Griever. The Griever family moved to Harrison from Star City in 1930 when Elmer's dad became pastor of the First Baptist Church. Elmer graduated from Harrison High School in the class of 1939. He then attended Ouachita College (now Ouachita Baptist University) in Arkadelphia but was forced to put his college plans on hold when he enlisted in the U.S. Navy to serve during World War II. He was stationed in Panama during the war.

After being discharged from the Navy, Elmer returned to Harrison and started his career as a traveling salesman. He had gotten his start in sales during high school working at the Heuer Shoe Store and McKinney's Store for Men. On the road, he sold shoes, hats, vitamins, pharmaceuticals, tires, and pioneered Oklahoma for Zenith television during his illustrious sales career.

Elmer met Marie Harding at the First Baptist Church, and they were married there on June 5, 1949. They spent almost 63 years together before Marie died in 2012. They lived in various places in Arkansas and Oklahoma while Elmer continued his successful sales career. In the mid 1950's, they settled down in Tulsa, Oklahoma, and built the only new house they would ever own with plans to stay there forever. They began meeting with five other families in each other's homes and formed the Skelly Drive Baptist Church, which is still a large, thriving church in Tulsa today. It was during this time that Elmer felt God's call into the ministry, and he came off the road and began selling Jesus!

Elmer and Marie sold their new home in Tulsa and moved to Fort Worth, Texas to attend Southwestern Baptist Theological Seminary. While attending seminary, he worked a job at Texas Refinery and became a certified Schwinn bicycle mechanic for the Toy Palace in Fort Worth. On weekends, he pastored the Lone Camp Baptist Church in Lone Camp, Texas.

After graduating from the seminary, Elmer and Marie moved back to their beloved Harrison to pastor the Woodland Heights Baptist Church. After serving several years there, they moved to Cassville, Missouri, to pastor the Emmanuel Baptist Church. It was here that their daughter, Lisa, was born. From there, they relocated to Berryville, Arkansas, to pastor the First Baptist Church. While in Berryville, Elmer was an active member of the Rotary Club and served as the club president in 1970-71. In 1980, a short move took them to Eureka Springs to begin a brand-new mission church, which was named Beaver Lake Baptist Church. During that time, he also worked for the Carroll-Boone Water District as a night plant operator drove a school bus, and was a substitute teacher at Eureka Springs High School. Elmer spent 20 years pastoring at Beaver Lake until his retirement in 2000.

Elmer and Marie purchased a home in Harrison in 1987 and spent their final years living here. They were active members of the First Baptist Church, and he also spent many Sundays filling pulpits around the area for his many pastor friends. In 1991, their lives were changed for the better when their only grandchild, Jessica, was born. They enjoyed many great years with her and very much enjoyed her frequent stays at their home. She was their world!

Elmer developed a love for cars and driving during his days on the road as a salesman. He collected model cars of mostly the antique variety. He especially loved convertibles, and over the last few years, he continually begged Kevin and Lisa to take him down to the bank to get money to go buy a red one!

Elmer is survived by daughter, Lisa Merrill, and husband, Kevin, of Harrison; one granddaughter, Jessica Crouch, and husband, Landen, of Victorville, California; great-grandchildren, Jasen and Madelyn Crouch, also of Victorville, California, and a third great-grandchild due in February; a sister-in-law, Berry Ruth Griever of Hamburg, Arkansas; several nieces, nephews, great-nieces, and great-nephews; and a host of friends who he loved dearly. Elmer was preceded in death by his parents; his wife, Marie; his sister, Lois Griever Etheridge and her husband Jubal; and his brother, Calvin Lewis (Buddy) Griever.

Funeral service was held on Saturday, August 1, 2020, at 10:00 a.m., at the First Baptist Church, Harrison, with Pastor Kenny Stacy officiating.

Burial was in Maplewood Cemetery.

Honorary pallbearers were the staff at Somerset Senior Living of Harrison who took such loving care of Elmer for the last almost 4 years.


Donations may be made to Three Wishes for Ruby's Residents, 102 W. Stephenson Ave., Harrison, AR 72601 in memory of Elmer Griever.

Roller-Christeson Funeral Home is complying with the Arkansas Department of Health guidelines for COVID-19 and limiting indoor funeral and visitation attendance. All attendees must provide and wear their own masks before entering.

I purchased the book, Fox's Book of Martyrs off of Ebay, last week.
The inscription said Presented to Elmer Griever Jr. on his graduation from Ouachita College, August 12, 1960 by Mr. & Mrs. F.R. Blair, Betty & Judy.
I'm looking forward to meeting him in Heaven, where each and every Blood bought born again Christian will spend ETERNITY with our Lord Jesus Christ.

We're just amazed at how much living he packed into 98 years. We remember him and his family, including his time at the "downtown" First Baptist Church. We'll be praying for all of his family and friends, thanking our Lord Jesus for what a blessing Mr. Griever was to them.

What a full life he had! He considered his family a blessing and always shared news or the latest pictures! We visited while he was waiting to see Dr. Tom and later I visited with him at the nursing center. Thinking of his family and wishing blessings of peace and happy memories. Sincerely, Jan Ragland

Lisa and Kevin, you and your family are in our hearts and prayers. Elmer left an amazing legacy. He is walking with our Lord. What a glorious thing!
Love and hugs!

Lisa and Kevin, sorry for the passing of your father/ father-in-law. He had many accomplishments through out his years. You should be very proud as he was proud of you. I know he will be missed by you, Kevin, family and friends. Cherish all your memories as they will last a lifetime. Prayers be with you at this time.

Bro. Elmer was such a prince of a man and rightly so as he lived his life as a child of the King. Being around him was always an interesting history lesson and I always enjoyed our outings together as they were filled with his wisdom and humor. Lisa may you and your family take comfort in knowing your Dad has moved on to the land of the living and his eternal home. We are so blessed to have known him.

Mr. Griever was a great friend of our family. I remember hearing stories from Mr. Griever about the shenanigans he and my Uncle Jimmy (James Tucker) got into growing up up in Harrison.

I am so thankful and appreciative to him for the kindness, compassion and friendship he extended to our family for decades. He was a sweetheart to me personally when I was grieving the death of my grandmother, Virginia Earnest. My deepest sympathies and condolences to his family. May he rest in peace.

I wish I could attend. Elmer was very influential in my life and ministry. I deeply respected him.