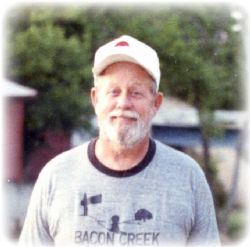 Born January 10, 1939, in Cairo, Illinois, to Hazel (Angel) and Charlie Matheney, he was raised in Searcy, Arkansas.

Jerry served in the United States Air Force until 1959. His last post was Sioux City, Iowa Air Force Base where he met and married his wife, Patricia. They were married on May 1, 1959 at Glendale Baptist Church and they celebrated sixty years of marriage.

In 1988 Jerry and Pat relocated to Searcy, Arkansas to care for his parents.

Jerry is preceded in death by his parents and numerous beloved pets.

I want to thank everyone who came to the visitation and service.
If the success of a man is measured by the love of his family and friends, then my father was the most successful man in the world.
Thank you for taking the time to pay your respects.
Rest in peace daddy.

Sorry to hear of your Dad's passing. I hope you always keep his memory close to heart. Prays to you and your family.

Jerry was such a nice man. We lived near them many years ago and always enjoyed visiting with the family. My thoughts and prayers are with you all. I know he will be greatly missed.

Ms. Pat and Tamara ; So sorry to read of your loss, I know you're are both very strong but this will be a real test. I am confident you will both pass this test and finish the course. Will be thinking of you and am here if anything I can do. Johnny & Mary