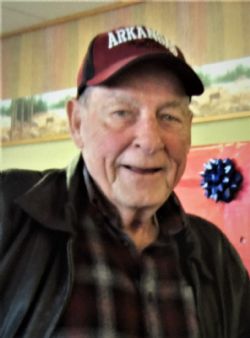 Eual Eugene Phillips, age 90 of Dennard, Arkansas passed from this life to be with the Lord on Monday, September 11th, 2017 at Ozark Health Nursing Center in Clinton, Arkansas. He was born in Snowball, Arkansas on July 18th, 1927 to Carl and Velona (Jones) Phillips.

Growing up in the Snowball community Gene was lovingly known as "Polly". He celebrated 51 years of marriage to Zorita (Wilson) Phillips before her passing in 2001. Gene was a proud World War II veteran of the United States Army and owned a successful printing business in Memphis, TN. Upon retirement, returning to Searcy County and his "roots" brought much joy into Gene's life as he rekindled old friendships. Being an avid sports fan, especially his beloved Razorback's and having a winsome personality, he was a natural for the sporting goods department at Wal-Mart in Clinton.

I'm so sad to hear we have lost Uncle Polly. I always loved his eyes, they sparkled when he laughed.
My prayers are with you, Lisa, Jeff,Mike and Chris.
Uncle Polly is now reunited with Zorrita and Nana Phillips my wonderful, sweet grandmother, his brother Clifford, and sisters, Carrie,Venita and Quindora.
As sad as it is to lose him, I'm sure he is happy to be with his loved ones again.
RIP Uncle Polly.

THANK YOU FOR YOUR SERVICES TO OUR GREAT COUNTRY. GOD BLESS THE USA DUE TO MEN LIKE YOU.