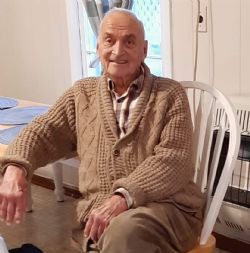 R. Warren DeMeyer, 90, of Gainesville, Missouri died Monday, August 2, 2021. He was born November 25, 1930 in Chicago Illinois to Roy and Anna (Schneider) DeMeyer. Warren was raised in the Ravenswood District of Chicago and attended Amundson High School and Wright Junior College. On April 29, 1978 Warren married the love of his life, Jacqueline (Jackie) Mooney. He was of the Presbyterian faith and a U.S. Army Reservist. He worked in sales at Amoco Oil Company and later Elwood Industries in Chicago until moving to Mtn Home Arkansas in 1992. In Arkansas he worked for the Corps of Engineers and two other local companies until his retirement in 2009, completing 60 years of full-time employment.

Warren enjoyed the outdoors and was active in all sports, especially Chicago 16 in softball, handball and fishing. He was a lifelong avid fan of the Chicago Cubs and Bears.

He was preceded in death by his parents, his brother Roy and his wife Jackie.

No local services are planned.

Arrangements are under the care of Roller Funeral Home.

Thinking of you all in this time of sorrow. In time may happy memories replace the sadness you feel today. We lived several houses down the street on Timber Hill Rd, in Buffalo Grove, IL. I remember Jackie’s smile and Warren’s easy going personality. Imagine that Howard & Jean Murgatroyd and Jackie & Warren are now sharing a toast to each other! Be well, and may God provide you all with peace during this difficult time.

One couldn't ask for a better neighbor! We talked some mornings, over coffee, about local and world news - neither of us solving anything. He enjoyed history and cinema stars. His favorite joke was "There's only two perfect people in this conversation, and I'm concerned about you!"

Had the pleasure of working with Warren. He was always smiling no matter what was going on. Seen him not long ago and after a long time of not seeing me he still remembered me. He was a great man! Sorry for your loss.

Warren and Jackie were wonderful neighbors when we all lived on Rocky Ridge Road, Mountain Home, AR. We had many good times with them and missed them when they moved to MO. They were great friends.

I hope he and Jackle are together again and living blissfully. I wish his relatives all the best.