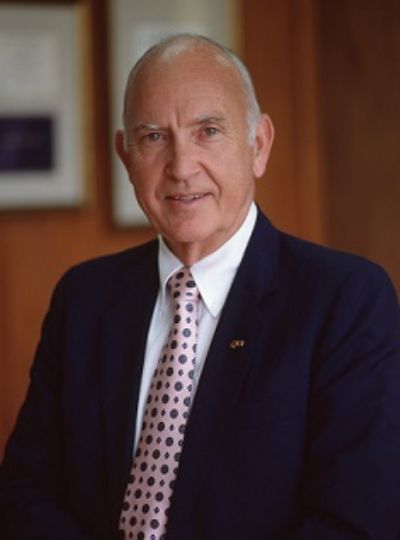 Fred James Taylor, former Chancellor of the University of Arkansas at Monticello, passed away August 27 in Little Rock, Arkansas, at the age of 88. He is preceded in death by his Wife, Janice Anette Willis Taylor, and his parents, Roy and Elsie Taylor. He is survived by his brother, Leroy Taylor; two sons Gregory and Bradley; two daughters-in-law, Danielle and Marsha; three grandchildren, Andrew, Jackson, and Lindsey. Fred was a member of the Second Presbyterian Church, Little Rock, Ar.

Born February 19, 1933, in Gans, Oklahoma, Fred was the youngest of two sons. He attended Gans public schools and graduated in 1951. Fred's early life in rural Northeastern Oklahoma had a lasting impact on his life and future. Reared in a supportive family environment that emphasized family values and stressed a strong work ethic, he learned at an early age to work at any job he could get. His work experiences ranged from various farm labor jobs of picking cotton and cutting spinach to maintaining a rural newspaper route to sell the GRIT newspaper (5 cents). Like many young people growing up in rural Oklahoma, Fred learned that education was his only means to economic and social mobility.

Without the financial means to attend college, Fred joined the Air Force, serving from 1951-55. The Korean War had just begun, and Fred was deployed for three years in Germany with the U.S. Occupation Forces working as a cryptographer and analyst.

Military service was a maturing experience for Fred, in both age and knowledge. His military experiences reaffirmed his commitment to continue his formal education and also provided a financial means through the GI Bill. After being discharged, Fred earned a bachelor's degree in Education from Northeastern State College, Tahlequah, OK. In 1957 he worked as a public school teacher for three years while earning a master's degree in Education from the University of Oklahoma. He went on to earn a Doctor of Education degree from the University of Northern Colorado in 1962.

During Fred's tenure as Chancellor, the University experienced a period of unprecedented growth and development. The Institution experienced record enrollments, achieved unconditional accreditation and mature institution status for its academic programs and awarded the first master's degree in school history.

Among the major milestones to Fred's administration are:
• Specialized accreditation for programs in forestry, teacher education, music and nursing.
• The creation of the UAM Foundation Fund for private fund-raising.
• The addition of baccalaureate degrees in nursing, social work, spatial information technology, and criminal justice.
• The addition of the Master of Science degree in forestry, the Master of Arts in teaching degree and the Master of Education degree.
• Capital improvements including the John F. Gibson University Center, student housing complex, forestry and agricultural research and extension centers, and a state-of-art library and technology center which the Board of Trustees later named The Fred J Taylor University Library and Technology Center.
• Creation of a comprehensive system of post-secondary education in Southeast Arkansas with addition of Technology campuses in McGehee and Crossett.
• Tripling the size of the operating budget with special emphasis on faculty and staff salaries, instructional equipment and student services.
• Creation of the Arkansas Rural Sourcing Center to provide career opportunities for students with Fortune 1000 companies.
• Provided access to National Public Radio in southeast Arkansas.

Dr. Taylor's impact on higher education extended far beyond the University. He helped shape national and international higher education policies through leadership roles in the American Association of State Colleges and Universities (AASCU). He was a part of a delegation of college and university presidents who traveled to the Republic of China (Taiwan) in 1982 and helped forge an historic education pact between Taiwan and the United States to allow exchange of faculty and students. In 1985 Fred accompanied a delegation of scientists to Germany's Black Forest to study the effects of acid rain. In 1987 Fred was invited to join a delegation of college and university presidents to visit the People's Republic of China to advise government officials on how to improve higher education of minorities.

Always active in community affairs, Fred was honored by the Monticello Rotary Club and Rotary International as an honorary Paul Harris Fellow. Fred and his wife Janice were also lifelong advocates of the arts throughout the state and especially in southeast Arkansas.

Upon Fred's retirement from the University in 2004, he became a consultant for the Arkansas Aging Initiative, a program of the Donald W. Reynolds Institute on Aging at the University of Arkansas for Medical Sciences. Fred worked with community leaders and local legislators to form advisory committees at the nine Regional Centers on Aging.

Dr. Taylor had an unwavering commitment to providing access to higher education for all students and took tremendous pride in the success of his students, alumni, UAM faculty and staff. ''It is not where they come from, but what they've been able to achieve that validates the role and mission of the university,'' he once said of UAM students. He believed that UAM represented an opportunity for students to improve their lives and attain goals that may have been difficult or impossible without a college education. Dr. Taylor continued to support the campus through establishment of the Fred and Janice Taylor Endowed Scholarship.

A memorial service will be held in the sanctuary at the Second Presbyterian Church in Little Rock on Saturday, September 11 at 11:00.

Memorials may be made to the Fred and Janice Taylor Endowed Scholarship, or the UAM Foundation Fund, P.O. Box 3520, Monticello, Arkansas 71656.

Thank God for Dr Fred Taylor He was a Wonderful Chancellor& a Fearless Leader.Song: “ May The Work I’ve done Speak for Me …“ My Sympathy ,Prayers & Love To Greg, Danielle, Brad & all the Grands & Family 💚🙏💚 Classie

To the Taylor Family. May the wonderful memories of Fred help bring you peace. Sending our sincere condolences.

Remembering the best chancellor of all times Dr. Fred Taylor.

He freely provided a wealth of direction and great wisdom. His humerous life directing stories will live on forever.

Praying that God will continue to wrap you in his all-powerful arms of grace and peace.

Greg and Bradley, and family, please know we send you our deepest condolences during the loss of your dad. What an amazing man. We have so many Taylor family stories that we re-tell in our family and they always end with one of Dr. Fred’s quick and witty statements. We Love You all. And we loved your mom and dad too.
Love, The Bob Hall Family
Bob, Coleen, Teddy (Lavon), Robin (Robert).

Dear Taylor Family:
I want to express my condolences to you all. My first memory of Dr. Taylor was when Greg and I roomed together in college, and he took us out for dinner at the Old Post Office on the Fayetteville Square. It was the first of several interactions through the years. I have always had a great deal of respect for him and what he was able to accomplish. My prayers are with you all.
- Alan

To Greg and Family,
So sorry for your loss. After reading his obituary your Dad did some incredible things. It also reminded me of his ties to Oklahoma and the University of Oklahoma. My pray your family is that you all may fell peace and comfort knowing that your Dad has now got the best seat in the house.