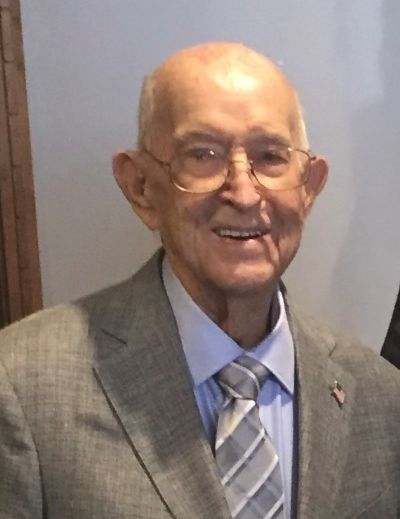 The third of four boys, Wallace grew up during the Great Depression years, developing a dedicated work ethic which would stay with him throughout his life. Beginning as a 5th grader, he worked continually through his high school years at jobs which included selling magazines and newspapers on the downtown streets of Little Rock; delivering groceries, first on a bicycle then in a borrowed truck; and handling assorted other jobs such as killing, plucking and drawing chickens for the meat market at John Alford's grocery store. For this work, he earned as much as $1.00 per day, money used to help support his family. Later he would say that he also earned a strong aversion to eating chicken for a while.

The combined experiences made him realize at an early age that one must work to have the necessities of life. It also earned him recognition among his high school graduating class as the most likely to succeed in business. One comment beneath Wallace's high school yearbook picture was a knowing comment that "Many could profit by following his example."

Upon graduating from Little Rock Senior High School in January 1942, Wallace was hired as a street runner for the Commercial National Bank in Little Rock and remained there progressing on to other jobs until he enlisted in the U.S. Army Air Corp. when he turned 18 in November 1942. He would proudly serve in the European Theater of Operations during WWII for the next three years, seeing duty in Northern Ireland, England, France, and Germany. Because of his talent for and love of singing, it was not unusual for Wallace to be asked in the gathering of troops or the general public in local areas to sing God Bless America and he always considered it a great honor to do so. In his later life, he would wear his baseball cap showing that he was a proud WWII veteran.

Following his discharge in 1945, he returned to Commercial National Bank and continued a career that was interrupted once again by a six-month active duty stint in the Air Force during the Korean Conflict in 1951-52. Afterward, he would climb through the executive ranks of the bank and eventually be elected in 1974 as Senior Vice President and Chairman of the Executive Committee where he would be in charge of the bank's complete lending operations. It was in that position where he would gain the affectionate nickname No-No among his bank colleagues.

However, Wallace's most important service was given to his Lord and Savior Jesus Christ. A member of Antioch Missionary Baptist Church in Little Rock for more than 85 years, he served over that time in various capacities, including church treasurer, a teacher for various Sunday School classes, choir director, and as a member of too many committees to count. He also served for 50 years as a Deacon of Antioch and Trustee at the Missionary Baptist Seminary. He exhibited a love of God not only by serving in those roles but also in the way he lived his daily life, proving that the comment beneath his high school yearbook remained so true. Many could profit by following his example.

Regardless of the many and varied ways Wallace showed his love of God, none gave him more joy than to come into God's presence with singing. Worshiping God with his singing voice, whether as a choir member, frequent soloist, or part of a duet came naturally to Wallace Cunningham and never got old.

Family and friends know that because of his lifelong walk with God, the first words Wallace heard when he entered Heaven was Jesus saying, "Well done, good and faithful servant."

A memorial service will be held at 10:30 a.m., Wednesday, September 1 at Antioch Missionary Baptist Church, 5300 Stagecoach Rd., Little Rock, Ark., 72204. A visitation will take place prior to the service at the church beginning at 9:30 a.m. Due to the recent COVID-19 surge in cases, the family requests that those attending please wear masks.

Wallace was a very special person and he will be missed. One of my favorite memories was of Wallace and my mother singing together. Wallace would come by and visit my mother when she lived with us. Mother always looked forward to his visits. A better man I did not know.

I have been blessed to have Bro. Wallace as a friend since my years at the Missionary Baptist Seminary. He has been so faithful to Antioch Missionary Baptist Church and the Seminary.
I rejoice to know he is now with our Lord Jesus Christ. God bless you all and comfort your hearts.

Paul, I only met your father on three or four occasions, but the impression that he left with me was significant. I fondly remember him as someone that I admired and respected. The descriptors that come to my mind when I think of him were “a true southern gentleman”, “a statesman”, “a role model”; and the Bible verse that comes to mind is John 1:47.

I wish that I could have interacted with him more! I will be praying for you and family as you rejoice in his homecoming.

Our deepest condolences and sincere sympathy to you and your family. Heaven has received a wonderful man. All our love and prayers for God to be with you now and in the future, ❤️

He was such a wonderful, Christian man and we were blessed to have known him. You're all in our thoughts and prayers.

So fortunate to have known Mr. Cunningham as part of the Board for our company. He was not only wise, but kind and patient with me and everyone I saw him interact with. He will be missed but certainly lived a full and meaningful life that touched those who knew him. My condolences to the family.

Alicia and Paul: So sorry to hear of the passing of your father. Had the pleasure of meeting him on a couple of occasions. He was a class act and you both were so blessed to have him in your lives!
All the best going forward to your family!
Jim Bransford

Thank you for providing our family with such sweet, caring memories.

Wallace was a perfect example of a true man of God. So thankful that my life was blessed just by knowing him. God bless each member of the family. May God hold you close and give you peace and comfort.

I was so sorry to hear about your loss. May you feel the prayers and receive the comfort of our Heavenly Father.

Sending love to our Cunningham family as you remember and celebrate the life of Uncle Wallace.

Paul & Family: We are sorry for your loss. But he lived a great life! You were blessed to have him for so many years. Charlie Wood

Uncle Wallace was alway the first person I looked for anytime I walked through the doors at Antioch. He was always there! I loved hearing him sing and always enjoyed watching the videos Karen would post of him in the years after I left Antioch. He reminded me so much of my granddaddy and I know they are having a wonderful family reunion in heaven! I will miss getting his hugs any time I ran into him!

So very sorry for your loss but happy for your father. Praying for peace and comfort for you and your family

Paul, my sincere condolences for the loss of your father. Your siblings and all of the family will be in my prayers. God bless each of you.
Vicki (Gleason) Barney

Alicia, I’m so sorry for your loss. He had a very impressive obituary. I think he lived life to the fullest. I bet he was tired and ready to go see his Maker

Alicia, so very sorry for your loss. Thoughts and prayers for you and your family.

So blessed to have know Mr. C.
We will always remember how he made everyone feel so special just by his firm handshake and his beautiful smile. And now God smile’s upon him as he enters heaven.

I was blessed to have him as my Uncle Wallace! An awesome example of Love for Christ and Family! I wish I could be there with you all.

Grandaddy I love you so much and miss you. I cherished all the time I spent with you and all you did for me over my life. You were a great man of God and served him daily. I can’t wait to see you again.

Wallace has been in my life as long as I had a memory. I was his grandson through marriage only but he never made me feel that fact. He always loved me like I was his blood and the man he was has always stuck with me. Wallace was everything that was good in humanity. He was an example of how to live life while respecting others and lifting everyone around him up through Christ. Though his body is gone his spirit lives in all that knew him. I love you grandpa!

God Bless. I know the Angel's are rejoicing at recieving another home.

It has been many years since we were at church at Antioch Baptist with Wallace.
He was someone you could never forget and he was a great servant of the Lord.
We pray you find comfort in knowing that he is rejoicing with The Lord.
Wayne and Donna Bennett