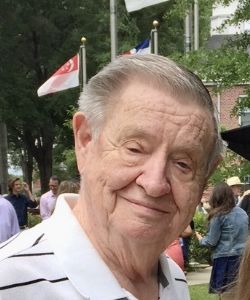 Russell Hugh Lynch, 88, of Little Rock, passed away at his home on Monday, August 9, 2021. He was born on October 28, 1932, in Bauxite, AR, to Walton and Era (Garlington) Lynch, where he later graduated from Little Rock High School in 1950. Russell served in the United States Army during the Korean War. He was a traveling salesman, working for various companies throughout his career, including Central Lawn and Garden, from which he retired. He also enjoyed weekends working with his wife, Ann, at Hocott's Garden Center. Russell's greatest joy was spending time with his family, to whom he was affectionately known as "Granddaddy." He never met a stranger and was a gifted conversationalist. He was a member of First Baptist Church of Little Rock.

Rusty, Lisa, Steve, Lorie, & Julie, I am so sorry for the loss of your Dad. You and your families are in my thoughts and prayers. Your Dad was always kind to me and I enjoyed visiting with him. May all your wonderful memories stay close to your hearts. Your parents were a big part of my life growing up and I think of them both when I think our all our neighborhood fun. Again, I am so sorry but happy to know he is well and happy with your Mom in Heaven. ❤️❤️

I am so sorry to hear about your father's passing.

Praying for your loss and thinking of the family during this difficult time.

What a wonderful Dad, Grandaddy, y'all had!
He was Always kind and polite to me, a sweet Uncle.
I'm sure he is having a great reunion with Aunt Ann!
God bless you each one, praying for y'all.
Clifton Hobbs

Sending all of you prayers and love. I’m so sorry to hear of your dads passing. I remember him fondly and times spent at the Lynch house.

Love ans prayers to all of you. So sorry for your loss.

Russell was a good friend of ours for many years! In fact, he was a friend to many. We will miss his kindness and concern for our family and others. Our love and sympathy to all the family.

May his soul rest in peace. Condolences to the family.

My deepest condolences to the family. May he Rest In Peace.

We were saddened to hear of Russell's passing but rejoicing that he is reunited with his sweet wife, Ann. The Lynch family blessed us in ways we can't even describe after we became their neighbors in Maywood Manor in 1974. Russell and Ann were such examples of Godly parents. We continue to pray for you, Rusty, Steve, Lisa, Lorie, and Julie.
Boyce and Pat Rorie, Mountain Home, AR