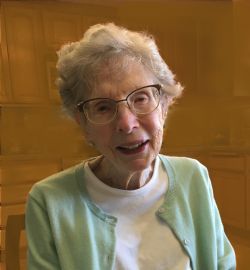 Eloise Raymond was born Mary Eloise Weir in Crossett, Arkansas, on October 29, 1924, the second child and oldest daughter to Eloise Feild Weir and Alexander Weir. She grew up in Little Rock and attended Little Rock High School and Little Rock Junior College. She received a full scholarship to the University of Chicago where she received her B.A. and M.B.A. at age 20.

On April 11, 1946, she married Albert Matthews Raymond, and they were happily married for sixty-six years (until his death in 2012). From 1946 to 1951 Eloise taught accounting and business subjects at the University of Arkansas at Fayetteville and Fall's Business College in Nashville, TN. In 1951, she and Albert moved to Conway, Arkansas, where she taught accounting in the Department of Economics and Business at Hendrix College until her retirement in 1988.

Her passion for teaching business and accounting and for helping students succeed was extraordinary. She would stay up late reading the Journal of Accountancy and keeping up with the newest directives from the Financial Accounting Standards Board, so she could bring the most up-to-date and accurate information on accounting to her students. She would routinely get up at 5 a.m. to grade accounting homework, exams, and practice sets. She held office hours for as long as needed, and students learned that she covered class material quite rapidly, often erasing the blackboard with one hand while simultaneously writing new lecture information with the other hand.

In the 1970's she and a colleague taught themselves computer programming so that they could teach this relatively new discipline to Hendrix students. Because she had graduated at the age of 20, she had been too young to sit for the CPA exam. Finally, after years of teaching CPA review classes, she sat for and passed the CPA exam in 1980 when she was 56.

Her work with students and for the advancement of the accounting profession was recognized in 1986-87 when she won the President's Award from the National Association of Accountants; and, she was recognized repeatedly over the years by the American Institute of CPA's in Arkansas for bringing students to the meetings for networking and education.

Eloise was a lifelong Methodist and active member of the First United Methodist Church in Conway. She was also a member of the Conway Shakespeare Club, the Hendrix Dames, and WSCS (Circle) at the Methodist Church. In 1968, she and several other women in the church started the Clifton Day Care Center, a nonprofit day care center to provide child care for low income workers, something that was relatively rare at the time.

She was an avid traveler, a reader of history and fiction, a shrewd bridge player, and active in politics. She was proud to have met two sitting first ladies, Eleanor Roosevelt and Hillary Rodham Clinton. And nothing would dissuade her from her daily exercise routine, walking even during the last week of her life.
Eloise passed away peacefully on August 1, 2021, after a brief stay in the hospital for non-CoVid related respiratory failure. She is predeceased by her husband, Albert, and her brother, Alexander Weir, Jr. She is survived by her two sisters, Jean Lincoln of Hideaway, Texas and Ida Kaufman of Richardson, Texas; by her two daughters, Jennie Raymond (Carl Hudson) of Atlanta, GA and Amy Raymond Snyder (Scott Snyder) of Martinez, CA; and by her two grandchildren, Rachel Eloise Raymond Snyder and Grant Brady Raymond Snyder of Martinez, CA, and eight nieces and nephews.

Visitation will be at Roller-McNutt Funeral Home on Saturday, August 14 from noon until 3 p.m. There will be a private service on Sunday, August 15, at 1:00 at Roller-McNutt. The family respectfully requests that you wear a mask and maintain social distancing at both events.

In lieu of flowers please consider sending a donation to the Albert and Eloise Raymond Scholarship Fund at Hendrix College, the Hendrix Annual Fund, or the Democratic Party of Arkansas.

My deepest condolences to the many friends and family of this very special woman, "Miss Raymond". I was a transfer student to Hendrix College in 1986 where I majored in Accounting because of my love for bookkeeping and numbers. Miss Raymond never failed to inspire, entertain and educate me with her love and passion, not only for the accounting profession, but for her desire to share this passion with all of her students. I can still see her placing a chalk smeared hand on her forehead with her eyes closed explaining the nuances of debits and credits. Miss Raymond, was and always will be a treasure!

Aunt Eloise was kind and gentle. I remember going through pictures of family spanning two centuries with her one night in Conway. That same night, Uncle Albert was chairing a faculty meeting at Hendrix College and Aunt Eloise stayed home to visit with me. When he returned he said that the faculty had approved allowing Hendrix students to have alcohol in their dorm rooms. Aunt Eloise said, "Shoot, if I was there I would have voted against that." Albert said the resolution passed with one vote. So Aunt Eloise visiting with me let Hendrix College students have some parties in their dorms. I will remember Aunt Eloise for her gracious hospitality and her glorious human soul.

I remember Aunt Eloise as being a most gracious and gentle conversationalist and we had many talks about family, history and current events.

Professor Raymond was my faculty advisor 1982-1986. She cajoled me into taking her FORTRAN programming course, and it ignited my career. Ava and I have always admired her and still remember her with humor and admiration these very many years later.

I am so sorry for your loss. I have many fond memories of Mrs. Raymond or Eray as we called her. She was an amazing accounting professor who inspired me everyday. I remember the lectures when she would say, how much time do we have left? 10 minutes, we have time for another chapter.

I also read the Wall Street journal for years because of her.

My prayers are with your family during this time.

Aunt Eloise showed interest in the things I was doing. She asked questions and seemed truly interested. I have many wonderful memories of seeing her laughing with her siblings and playing bridge. She often recommended good books to me and I enjoyed conversations with her.

Love to all of you,
Rebecca

Eloise and Albert Raymond were both wonderful influences on me. They were two of the most kind and most dedicated profs at Hendrix. I felt fortunate also to call them both friends and colleagues.

Fellow faculty members at Hendrix drew inspiration from Eloise's energy and commitment. She was an excellent role model as both a professor and an active Christian.

We love you, Aunt Eloise!
The Dent Family