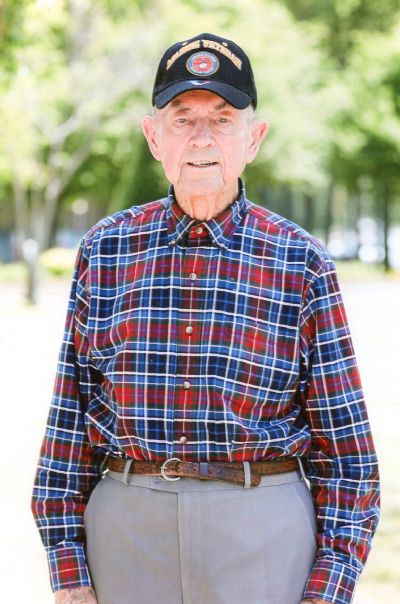 Aubrey Monroe "Roe"Neal, 97, went to be with the Lord on June 2, 2022. He was born on January 4, 1925 in Tuckerman, Arkansas.
He is survived by his son Aubrey "A.M."Neal and his wife, Joan.
For the last several years, he was rarely without his companion, Mary Goldschmid. She was a big part of his life in his last years.
He was preceded in death by his wife, Jane Powell Neal, his father Alva Williamson Neal, and his mother, Dovie D. Neal.
Roe grew up in Marianna, Arkansas, and graduated from T.A. Futrall High School in 1943. He was drafted immediately into the Navy as a Second-Class Seaman in World War II. He was selected for the Honor Guard for three months and attended aviation ordinance mechanic school in Norman, Oklahoma. In 1945, he was assigned to learn how to equip and arm a secret weapon called the "Tiny Tim", but Japan surrendered before the weapon was used.
After the war, Roe returned to Marianna and worked at a service station for three years. In 1950, he began preaching at Highway 1 Baptist Church before entering the Chaplain Corps of the Navy in 1959 and where he was commissioned First Lieutenant. As a chaplain, he traveled the world, teaching the word of God. While he was stationed in Meridian, Mississippi, he even helped establish the first chapel on base. In 1967, Roe was sent to Norfolk, Virginia to serve an elite assignment for President Johnson's presidential ship for two years. While there, he was promoted to Lieutenant Commander.
After 25 years of service, Roe retired from the Navy in 1979 and pastored Monroe Baptist Church in Arkansas for 10 Years and Shaw's Chapel in Brownsville, Tennessee, for 16 years.
In 2021, Roe received the Alumnus of the Year Award from Union University. He was a Godly man, very generous in giving, kind, and caring. He will be missed. Roe said he was grateful for the opportunities the Lord had given him and for the way God's blessings has allowed him to bless others.
Honorary pallbearers are Shawn Clay, Cody Clay, Josh Long, Gabe Saxon and Tommy Allen.
Graveside services will be held at Cedar Heights Cemetery on Wednesday, June 15, 2022 at 10:30 A.M. with Pastor Steven Price officiating.
In Lieu of flowers, memorials in Roe's honor may be sent to Union University in Jackson, Tennessee.