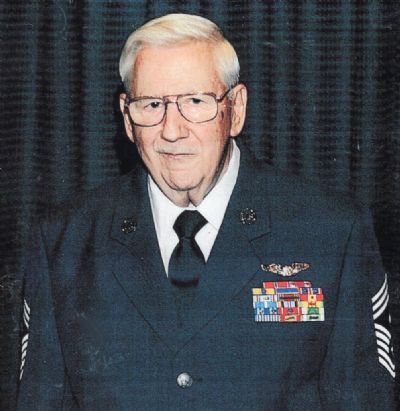 Clay is survived by his wife Carolyn; his three daughters, Marye Boyd, Teresa Robison, and Michele Jenkins. He is also survived by six grandchildren: Crystal, Carlye, Cassie, Rachel, Carnell, and Cordel; and three great-grandchildren: John, Sophia, and Jaxon - all of whom he loved dearly.

Clay and Carolyn were married at Elmendorf AFB, Alaska on May 25, 1957.

During his career, CMSgt Jenkins served in the Korea and Vietnam conflicts. He was also stationed in Thailand, and at nine bases in the U.S., including four Radar sites. In 1975 he helped organize a Bicentennial Flag Ceremony, a presentation of eight of our national flags which he narrated. He conducted this flag ceremony at several Air Force bases in the U.S., Korea, and introduced the ceremony at the Sherwood Moose Lodge, where he was a member. He received several awards and decorations for his service, including two commendation medals, the Bronze Star, and four Meritorious Service Medals.

There will be a viewing at Roller-Owens Funeral Home on JFK Blvd, North Little Rock, Wednesday, March 16, from 5PM to 7PM. A graveside service will be held at the Arkansas State Veterans Cemetery, Friday, March 18, at 11:00 a.m.

Carolyn, I am so very sorry to hear about Clay. I just found out tonight. He and you were great friends. Hope everything is good for you. Clay was so much fun. He and Mac will catch up on all they’ve missed since Mac has been gone since 2009. He also is at the Veterans cemetery on Maryland Dr in NLR

Carolyn, you probably do not remember me but I knew you and Clay when I was head cashier at the NCO Club back in the mid-seventies until 2001. I am so sorry to hear of Clay's passing. You and your family are in my prayers.

Sympathies to your family during this time. Clay was one of the most gracious and interested men that I have ever met.

Clay was a gentleman and an inspiration. Carolyn may you find comfort knowing he left a wonderful legacy. Peace be you and your family.

We really enjoyed knowing Clay. He was a good friend and so kind to our family. We will miss him!!

To Carolyn and family…. Praying for strength and comfort for all.. Clay is home with our Lord and Karen Stenson and Bill.. hope your memories will serve as comfort… his love for you all is everlasting!!! Sincere condolences to all….. Jim and Vicki Rucker.

Dear Carolyn, Sandra and I were very sorry to hear of Clay's passing. We were just talking about the two of you yesterday! Clay was a true patriot and friend. We will miss him. We will try to call soon.

So long to my favorite Brother-in-Law.