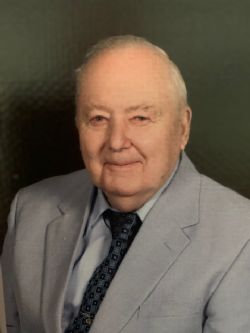 George spent thirty-five years as a truck driver. He served in the United States Army during the Korean War where he was stationed in Germany. After retiring to Fairfield Bay, he enjoyed golfing and bowling. George took up the hobby of making stained glass. In his younger years he raced motorcycles. George like telling the story when he was racing in Illinois, he broke his leg and the only room available was on the maternity floor. Later he and his son, Kevin built several motorcycles together. George was known for his sense of humor; he always had a supply of jokes. He served on the Wear and Share Board of Directors and volunteered at the store. He was member of the American Legion Post #333and a loyal Green Bay Packers fan. George was a member of Fairfield Bay Baptist Church and served as an adult Sunday School teacher, usher and assistant treasurer. Parkinson's disease halted his activities. George was a loving husband, father, and grandfather.

A memorial service will be held in George Gerndt's honor Saturday, June 19, 2021 at Fairfield Bay Baptist Church at 11:00 am.

Elda, I am so sorry for your loss. I haven't seen you in years. I will keep you and your family in my prayers.

Elda...I am so sorry to hear of your husbands' death...Know that you and your family are in my prayers...🙏

Elda , so sorry for your loss

Elda I'm so sorry to hear of George's passing. My thoughts and prayers are with you and your family during this most difficult time.

Elda, we are so sorry to hear of George's passing. I much enjoyed his great sense of humor.

My deepest sympathies on your loss. I always enjoyed Uncle George's sense of humor and even used his jokes on occasion. He is sorely missed. May God comfort and be with you.