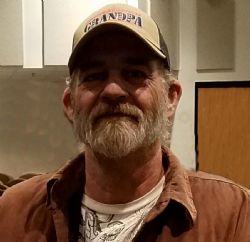 Friday, May 7th, 2021, Kenny Gibbons, loving husband, father, grandfather and great-grandfather, passed away at the age of 61.

Kenny was born on August 2, 1959 in Abilene, Texas to Gene and Mary E. Gibbons. Kenny was married to Mary L. Gibbons for 45 years and they raised four children.

He was preceded in death by his parents, one son, Adam and a brother, Ron.

Kenny ran his own landscaping and handyman business for several years. He was a man of many skills and talents. Before he started his own business, he had been a licensed appliance service & repairman. He also was a very talented mechanic and always repaired his own vehicles, no matter the situation. Kenny was not known for being talkative, but everywhere he had worked he was a valuable asset and easily made friends along the way.

Kenny never made it known to many, but he enjoyed family gatherings during the holidays (or just the occasional outdoor barbeque in the yard). In his free time, he enjoyed riding his motorcycle every chance he got. Kenny was known to ride his motorcycle even in the worst of weather, always doing a ride every New Year's Day for example. Kenny also played guitar every week with his friends over the years. He had been part of a band in northern Missouri for a number of years previously. Later on in life, he formed a new band with his friend Annette in which they played at several local clubs and antique shops. Kenny especially loved playing guitar for his late wife Mary, also having written a few songs for her. Kenny was not known to be openly social to strangers, but he was very open and loyal to the friends that knew him.

Kenny loved and was loved by his family to the best he always knew how. He was a man of few words and let his actions speak for him mostly. Kenny believed strongly in every person being true to themselves and accountable for their own actions. He tried his best to pass that knowledge on to his children and grandchildren. Kenny loved his children, grandchildren, and great-grandchildren more than they will probably know. He was always immensely proud of them all and wanted the best for their futures.

Kenny is survived by his siblings; Pam and Jim. He is also survived by his children Michael, Joe, and Rebecka, his grandchildren; Aiden, Kenny (Reed), Lexi, Calvin (Drew), and Issabelle, his great-grandchild, Ezekiel (Zeke)and numerous nieces and nephews.

Kenny's family will not be having a viewing or memorial service per his final wishes.

Love you uncle Kenny.. already been missing you for year's......

Until we meet again🦅🏴

What a shock, Kenny was a very good man and was very good to my cousin Mary Lou, Mike, Joe and Becka. He will be greatly missed, My deepest sympathy to the family, and my love to you all

So sad to learn of Kenny's death. He and Mary were wonderful and I will sorely miss them both. She helped take care of my mom, and I enjoyed listening to Kenny's music.

He was and still is one of the best friends I've ever had and I will miss him. I honestly believe he died of a broken heart. I hope he is at peace now

So sorry to hear.

Kenny and I were classmates at Tarkio, class of 1977. Kenny was a quite person, but he was a caring person. Prayers and hugs 🤗 for all his family. He will continue to play his guitar for everyone. God Bless, Martha

sorry for the loss. always feel blessed of the times we had

Michael,Joe,Rebecka and family:I am truly saddened by your devastating lose. May God hold you in the palm of His hand.

Sorry to hear of Kenny’s passing. He was a classmate and I have fond memories of him.

Kenny was a classmate of mine in high school at Tarkio, MO> I learned of his passing just Sunday. I agree, he was a man of few words. As a Facebook friend it was difficult to visit, but I am sorry of his passing. I am glad he had a great life, good family and a long list of friends. It's been many years since I'd seen him, but again, he did leave favorable impressions on people.

Ride high my friend. I did not know that Mary had passed last year. Bless the family and my thoughts and prayers are with you all during this difficult time. I, too, am a guitar "jammer" and love playing with friends. I wish I could have done some pickin' with Kenny !