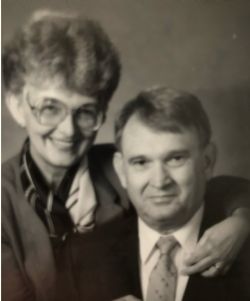 Mary "Kay" Heathscott, age 90, passed away at her home at Providence Assisted Living in Searcy, AR on April 24, 2021, surrounded by her family. Kay, as she was known to her friends and family, was born in Sutton, WV on October 9, 1930 and grew up in Parkersburg, WV. Kay was the youngest of five children and is preceded in death by her parents, four siblings, and her beloved husband of 64 years, John Parker Heathscott, who passed away in February.

Kay had a love of life and adventure from an early age and told her grandchildren that, as a child, she wanted to "Do a different thing every day when she grew up!" After graduating from college with a degree in Elementary Education, she showed her adventurous spirit by closing her eyes and choosing a spot on the map, moving to Key West, FL to begin her teaching career. There she met her husband, John Parker, while volunteering at the USO in Key West, where John was on shore leave with the U.S. Navy. She and John were married in January, 1957.

Kay continued her career as an elementary school teacher at many locations including Guantanamo Bay, Cuba and Scotland, as she followed her husband's Naval assignments. She spent her last 26 years teaching at West Point Elementary, where she touched thousands of young lives, retiring after 33 years. After John retired from the Navy in 1971, she and John returned to Arkansas to raise their two daughters, Janie and Josephine. Kay and John continued to feed the travel bug, after retirement, by traveling, via military space available flights, to many exciting locations including Italy and the Azores. Kay also enjoyed cruising and traveling to visit her daughters, wherever they were, as both were in the military. These trips took her to Hawaii and Wales. Kay's other interests included listening to classical music, crafting, reading mysteries, playing cards, and watching British comedies.

Above all, Kay valued family. Whether it was supporting her husband on the farm, driving across the United States to support her daughters and their families, or learning to use a tablet to Facetime her grandkids at 80 years old, she always remained connected with her family. She is survived and will be dearly missed, by her 2 daughters, Mary Jane (Harry) Heisner and Josephine Parker (Meldon) Tilson, 5 granddaughters, Kelli, Savannah, Kendra, Jillian, and Callie and 10 great grandchildren.

In lieu of flowers, the family asks that you make a donation in Kay's memory, to the Arkansas Hospice Foundation at www.arkansashospice.org. The loving care provided by the Hospice professionals helped Kay die with dignity and in the comfort of her own home, surrounded by those who loved her.

No services are planned at this time

Kay was a very kind and patient person. She always smiled and tried to help her students. She was a joy to teach with. I will always remember her. Tammie Rhodes

Kathy said was I was going to say! That Aunt Kay was so young and chic, and Uncle John so dashing. I remember when they visited right after they were married (and brought along your Uncle Roger; my 8-year-old self had a huge crush on him). And traveling around the world -- Scotland seemed like a great adventure. I'm so glad we were able to spend time with her when she and Mom and I (and Janie) went to Lee's wedding and the three of us drove back to Ohio. Aunt Kay was always so calm and sweet -- the anchor in that family. She and Uncle John left behind a wonderful family and rich memories.

So sorry to see the last of the Robinson family leave us. They left a great legacy, with all the kids and grandkids. When I was young, Aunt Kay was the exotic, young, exciting sister of my Mom, living in Key West, and so young and pretty! She was a great help to Mom when Dad was in his last years in Ohio. I appreciate her help and support for Mom. Such great memories of a wonderful family.