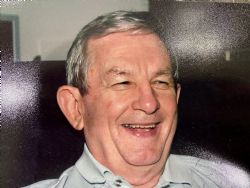 Jerry G. Neville, 82, of Greer, South Carolina, formerly of Bryant, Arkansas, went to be with the Lord on Saturday, April 18, 2021. He was born on April 11, 1939, in Birmingham, Alabama, to Pennington and Grace Neville. Jerry was retired after many years in the grocery business, was a devout Catholic and served in the United States Air Force for four years during the Vietnam War. In addition, he enjoyed spending time cheering on his Alma Mater, Southern Mississippi's football team and spent the last five years living with his daughter and her family in South Carolina. Jerry loved watching his grandchildren grow into young adults and he had a very special bond with his granddaughter, Mary Grace. Jerry was a wonderful father, grandfather, uncle, brother, and friend.

He was preceded in death by his parents, his wife, Betty Fowler Neville and his brother Clark Neville. Jerry is survived by his daughter, Paige Neville Smith (Lee); three grandchildren, Preston (20), Dawson (16), and Mary Grace (10); one sister, Pat Davenport; two brothers; Penn Neville and Bryan Neville, and many nieces and nephews.

Jerry will definitely be missed. He was a kind and extremely thoughtful man. I have good memories of Jerry. One time he was visiting in Houston after just coming in from his visit in Austin. As soon as he got hear he just wanted to go home he was adamant on leaving at this certain time on a bus to get to Dallas where he ended up stranded and had to be rescued. The time we went to Thanksgiving in Texarkana. Sharon told us about a Zebra and Camel up the road so Jerry and I ventured out to see the animals. Jerry always spoke lovingly about his grandchildren. He loved them all so very much. Prayers to Paige and her family now and in the months ahead. All my love, Patti Browning

The kindest and most thoughtful man one could ever know. He loved the Lord and his family

Jerry was "all heart" and I miss talking to him so much. He and Mary Grace had a special bond. I believe he is in heaven bring welcomed by other family members.