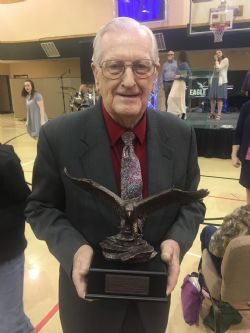 Edward Powers, age 87, of Harrison, was born February 9, 1933, in the Red Oak community just west of Valley Springs Arkansas, to Hulan and Mildred Powers. He was BORN AGAIN at a spring revival at First Baptist Church of Harrison in 1945, at the age of 12. His lifelong mission was to bring as many as possible to the saving knowledge of his Savior and Lord, Jesus Christ. He was escorted into the presence of his Savior on December 10, 2020.

Edward was preceded in death by his wife and best friend, Phyllis (Starkey) Powers; his parents; his brother, Mitchell Powers; and his in-laws, Gordon and Ruby Starkey.

Edward is survived by his daughter and son-in-law, Sarah Powers Andrews and Robert, of Conway; his son and daughter-in-law, Phillip Powers and Carleen, of Harrison; one sister-in-law, Mitchell's wife, Bea Powers, of Harrison; and his brother and sister-in-law, James "Mouse" Powers and Marilyn, of Harrison. He is also survived by his grandchildren, Christopher Powers, Angela Andrews, Zack Andrews, Matthew Powers, and Rebecca Powers; his great-grandchildren, Matthew Arman, Loran Kidd, Brandon Powers, Caitlin Powers, and Toxey Ahrabli; and a host of other family.

Edward was a 1951 graduate of Harrison High School. The Lord called him to preach during his senior year. It took him several months to accept God's calling, but in March of 1951, he said, "I finally gave the Lord my life to do whatever He was calling me to do." In the fall of that year, he started college at Ouachita Baptist College to prepare for that calling. He was ordained to the Gospel Ministry by Eagle Heights Baptist Church in Harrison on April 17, 1953. He completed his degree at Ouachita Baptist in the summer of 1955.

He met the one that would become the love of his life, Phyllis Starkey, in December of 1954. They were married on September 16, 1955. This was the start of years of partnering in the gospel together. Wanting to expand his education, he later attended Southwestern Baptist Theological Seminary and graduated with a Master of Divinity in 1966.

Dad faithfully served the Lord ministering to people for 69 years. In his final years, he returned to Eagle Heights Baptist, the church that had ordained him to the ministry and where Phillip, his son, is now Minister of Music. Dad and Mom served for several years at Eagle Heights upon returning as Senior Adult ministers, AWANA leaders, and filling in the pulpit on several occasions. As his son, I was there when he preached his last public sermon. It was for the funeral service of an old friend he had pastored while in Yellville 48 years ago. That was March 12th of this year. As he entered Heaven's gates, I know the Lord said, "Well done, good and faithful servant, enter into the joy of your Master".

Interment was in Maplewood Cemetery

In lieu of flowers, the family requests memorials in Edward's name be made to the Building Fund at Eagle Heights Baptist Church, 703 E. Walters, Harrison, AR.


Roller-Christeson Funeral Home is complying with the Arkansas Department of Health guidelines for COVID-19 and limiting indoor funeral and visitation attendance. All attendees must provide and wear their own masks before entering.

Phil and Carlene and family we are sorry for your loss but we know heaven is
full of rejoicing at Ed being with Jesus and Phyllis. We were blessed to know
and worship with Ed and Phyllis and we loved them both. They were such good examples of the servants loving heart. With our sympathy to your whole family.

Bro. Ed was a good friend and faithful Christian brother to our family at the First Baptist Church of Cotter. We are thankful for his service to our church and our Association. His was a life well lived. He fought a good fight, he finished his race, and he kept the faith. Our prayers are with all the Powers family during this time. He has received his reward!

Sarah, Phillip and family, I know the loss and it is great, he was a kind and gentle soul and know that many people grieve with you. He is celebrating a joyous occasion with so many we have loved and known. God Bless
Melissa Jameson and family

I wish all of you peace and comfort during this time.

Phil and Carleen so sorry for your loss. Ed was a good and faithful servant. Praying for peace and comfort during this time.

My prayers and thoughts go out to you, Phil and family. Ed was such a wonderful man. I was blessed to have known him and cared for him and Phyllis. He will be truly missed.

We are praying for you guys with your loss. Bro. Ed was our first pastor when we moved to Prairie Grove. He and Phyllis were very special people. We thank God for their work in Prairie Grove and the love they gave us and the community.

Brother Powers and Phyllis were a big part of our family’s life. I thank you for your love and friendship to Mom (Mozelle) over many years.

Loved him as our pastor and friend. He will be greatly missed prayers for the family

God’s faithful servant went to be with his wonderful wife . Bless you Phil and Carleen Powers and family. Love you.

Sorry for your loss. He was a great man. Great memories of him and his family. Love and Hugs! 😢

I am deeply sorry for your loss. We will be praying for your family during this difficult time. His legacy will live on through his beautiful family.