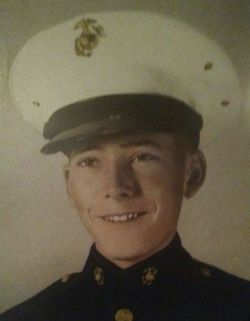 of Terre Haute, IN

Buddy bravely served his country in the United States Marine Corps during the Korean War while stationed in Guam. He had a passion for cars, and worked in the automotive industry for over 40 years in sales and service, primarily in Arkansas and Louisiana.

Buddy enjoyed fishing, woodworking, horse racing, watching football and WWE. He was a die-hard Arkansas Razorbacks and New Orleans Saints fan. Buddy was incredibly creative; he enjoyed crafting board games, lamps, porch swings, rocking chairs, lamps, squirrel feeders, and so much more. He loved spending time with his family and friends, and enjoyed visiting over a cold brew, and his favorite brand of beer was Miller Lite.

He was a rough and tough Marine, but he had a tender heart and an incredible soft spot, especially for his grandchildren and great-grandchildren. He loved and missed his Arkansas roots, where he always felt most at peace. His family and friends will miss his incredibly witty sense of humor, talking about football and cars, watching him light up as he showed his woodworking projects, telling stories, and heartily enjoying huge helpings of fried catfish and shrimp.

He is preceded in death by his father, mother, and stepfather, Albert Johnson, his two brothers, four sisters, two step-brothers, and one step-sister.

He is survived by his loving wife of 62 years, Ann Fuller, his son, John Fuller and daughter-in-law, Jane, grandchildren; Amanda Nicole Fuller-Snow, and Johnathon "Lee" Fuller II, great grandchildren; Hunter Michael Simpson, Madison Elizabeth Simpson, Noah Christopher Snow, Payton Danielle Snow, and Hayden Elizabeth Fuller, along with many nieces and nephews--all of whom meant the world to him.

you will be missed thank you for serving our country