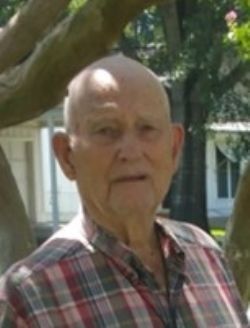 Headlee C. Caldwell, 99, of Benton passed away Friday, September 20, 2019. He was born May 19, 1920 in Griffithville, Arkansas to the late Bratton and Audie Caldwell. In addition to his parents he is preceded in death by his wife, Wilma Caldwell; son, Dwight Caldwell, Sr.; and grandson, Greg Philamlee.

Headlee was a member of Holland Chapel Baptist Church. He was a great gardener and was known for sharing his fruits and vegetables with his friends and family, and could often be seen walking or going for a morning swim to stay in shape. In his earlier years he was part of C.C.C. Camp where he earned his high school diploma. Headlee and his wife, Wilma, were very active members in the Eastern Star. He was also a 32nd Degree Mason.

A time of visitation will begin at 10:00 a.m., an hour prior to the service, in the chapel of Roller-Ballard Funeral Home.

A great man whose heritage will live on in a great family.

Dear Norma and All Our Family,

Pat and I wish to convey our sincere condolences on the loss of Headlee. No finer or truer man ever lived and we are certain he will be missed by all who loved him. It is sad to think that the last of another generation has gone to be with the LORD, however, we realize GOD has gained a great companion. We pray GOD will richly bless your families and guide you through these trying times.