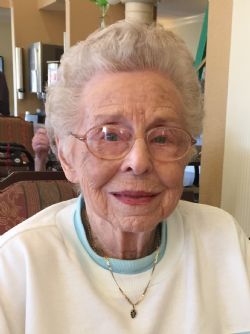 Loene Dixon, (93), of Benton was born at home on September 20th, 1923 in Fort Scott, Kansas and died June 24th, 2017 at the hospice facility in Bryant, Arkansas.
She was the third of four children, and only daughter of Leo and Opal Harlan of Fort Scott, Kansas. She and her brothers, Leon Harlan, Lloyd Harlan and Tom Harlan, grew up during the Great Depression. It was a strong and loving family that was active in the First Church of God. All of her childhood family preceded her in death.

She married Leslie Dixon of Mulberry, Kansas on August 25th, 1942, just two days before he left to fight in WWII. They were married for 70 years and together raised three children. Although they lived in several towns, their two ''home towns'' were Fort Scott, Kansas and Benton, Arkansas. They were cherished members of the First Church of God in Fort Scott, Kansas; Salem Baptist in Salem, Arkansas; and Spring Creek Baptist in Benton, Arkansas. She was widowed five years ago.
She is survived by three children and their spouses: Larry and Willa Dixon of Interlachen, Florida; Diane and Horace Brock of Bryant, Arkansas; and David and Kathy Dixon of Brandon, Mississippi. We were truly blessed to have a loving mother.
She had 9 grandchildren: Kim Carden, Dale Dixon, Stacie Hengy, Angela Thompson, Casey Parker, Russell Parker, Michael Parker, Sarah Goodwin and Jonathan Dixon. Her family continues to grow with 16 great grandchildren and 3 great-great grandchildren. All of whom, except Casey, survive her.

She had a loving heart, generous spirit, endearing smile, delightful sense of humor, and beautiful auburn hair. While she will be missed by all of us who knew and loved her, she has been welcomed by all those who proceeded her in death. What a wonderful reunion that will be when we are all together again.

Funeral service will be held at 10:00 a.m. Wednesday , June 28, 2017 in the chapel of Roller-Ballard Funeral Home (315-4047) with Dr. Terry Parrish officiating. Interment will follow at Pinecrest Memorial Park in Alexander.

I pitched horseshoes with Les for several years. We won a few trophys, including Hope, Ar. Watermelon Festival. My wife and I got to know Loene and enjoyed their company. Les was a fine man and Loene was a fine lady. We visited her some at her home after Les died, and knew how much she missed him. They were both fun loving Christians, I'm sure they're having a great reunion in their Heavenly home. Our condolences to the family, Your loss is heavens gain.