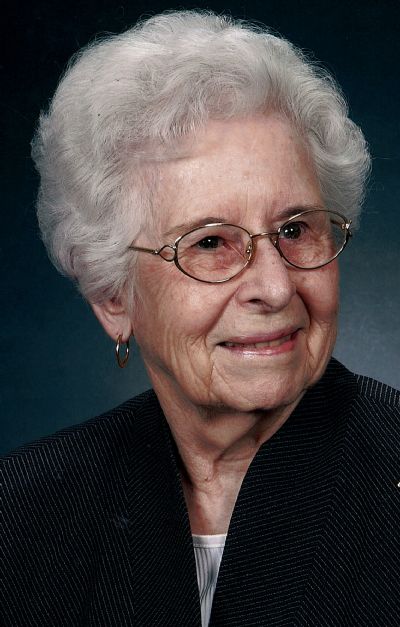 
Margaret Purtle Alexander, born on December 10, 1918 to parents James Lester and Nancy Hester Gullick Purtle, in Nevada County (Prescott), Arkansas, the oldest of 7 children, died on May 3, 2022 at the age of 103.

She graduated from the University of Arkansas with BSHE and MS degrees. She retired from U of A Cooperative Extension Service after having worked as Home Demonstration Agent in Stone, Cleburne, White, and Ashley Counties before moving to the Little Rock State Office as an Extension Specialist, District Program Leader, and retired as the Northwest District Director. While working for U of A. Extension Service, she received a number of awards; awards which she attributed to the cooperation and good work of the staff and cliental with whom she worked. She was honored by being inducted into the Agriculture Hall of Fame in 2011.

After retirement, she and an Extension friend organized an informal travel group of Extension retirees and friends and enjoyed meeting and traveling throughout the United States and several countries outside the US. Also after retirement, she and her husband, Marvin, helped organize the 22nd Bomb Squadron Association, a group of Army Air Force Veterans that Marvin had served with in Burma, China and India during World War II. They continued to meet annually with this group and enjoyed traveling to the various cities throughout the US where the meetings were held until his death in 1992. Margaret continued to stay in touch and meet with the group accompanied by a daughter and/or granddaughter.

She was an active member of the Highland Valley United Methodist Church, the Little Rock Departmental Club and NARFE (National Association of Active and Retired Federal Employees).

Margaret loved to travel, read, cook, knit, and visit family and friends. She spent the last years of her life living in Presbyterian Village, making new friends and enjoying the amenities offered in both Independent and Assisted Living, as needed.

A memorial, a celebration of Margaret's life, will be held in the Presbyterian Village Chapel on Wednesday, May 11th at 10:30 a.m. A private burial service will be held at Forest Hills. Arrangements are being handled by Roller-Chenal Funeral Home of Little Rock.

In lieu of flowers, contributions to Highland Valley UMC, Presbyterian Village Foundation or charity of choice will be appreciated by family.

Ms Margaret showed us all the best she had to offer every day ! God blessed our family with a loving friend and encourager . A true lady who will be missed by all of us ! Thank you Ms .Margaret for your friendship and love . God is great .

Margaret was my first professional mentor and teacher when I went to work in Ashley County in 1962. I was extremely fortunate to have her guidance and teaching. She was talented intelligent and full of ideas. She set a great example for me to follow. I never heard her speak badly about or to anyone. She also made work fun and interesting! I have never met a sweeter or kinder person anywhere!

Margaret was such a dear person! I told more than one person that I truly believed God sent
her as an angel on earth. If someone ever said they didn't believe in angels on earth, I said that they
just hadn't met Margaret. She was such a big part of HV for so long and dearly loved! She will be missed!

Margaret was our hero in Extension work. She was the first female promoted to a District Director position. We were all so proud of her! So he was a servant leader, choosing to encourage and promote those she supervised. She was always a lady, always kind, but firm when she needed to be. She had the respect of men and women. Prayers for the family.

I had the pleasure of having Mrs. Alexander as my District Agent while in NW District. She taught me so much. She will be missed. Love and prayers for the family.