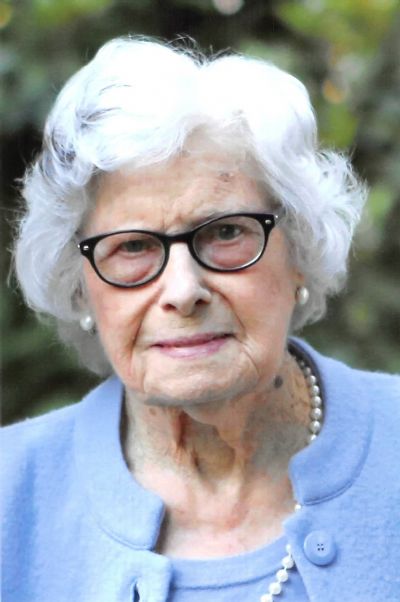 Troyce Alene Fielder went to be with her Lord and Savior, Jesus Christ, on Saturday, March 12, 2022 at age of 98. Alene was born on January 28, 1924 in Bigelow, Arkansas to Docia Ann and Phonie Gray Powers. She is preceded in death by her husband, Tyler Alva Fielder, her parents, two brothers, Clyde Powers, Oliver Powers, a sister, Thelma Powers, as well as her in-laws, Alva and Minnie Fielder, brothers and sisters in laws Ralph and Mildred Williams, Tom and Ruth Jefferson, Bill and Glynette Fielder and several nieces and nephews.

Alene grew up in the Harmony community on Highway 10 and graduated from Joe T. Robinson High School in 1942. She discovered her hobbies and talents at an early age. Alene would hide the kerosine lantern under a blanket so she could read until late in the night. She was so proud of the library of books she had collected. Even with diminished vision, she managed to read with magnifying glasses. Alene quickly realized Home Economics was her favorite class. She became an accomplished seamstress, making all of Ruth Ann's clothes including her wedding dress.

After high school, Alene moved to Little Rock where she attended Draughon Business School. She soon began working at Southwestern Bell. Shortly before WWII, Alene met the love of her life, Tyler Alva Fielder. Tyler wrote letters to Alene weekly while he served overseas in the Army. After he returned from the war, they were married on October 26, 1945 and were married for 65 years. They were blessed with the birth of one daughter. Alene loved Tyler so much, continually thanking God for the wonderful husband He had given her.

Tyler and Alene moved to Searcy where Alene worked at Southwestern Bell as a telephone operator for over 35 years. Alene cherished those years working with the ''telephone girls''. She had so many special friendships that have lasted a lifetime.

Alene loved her Lord and Savior, Jesus Christ, a love that grew deeper throughout her life. She was so blessed to grow up in a strong Christian home. Alene's faith journey began at 12 years of age when she asked Jesus into her heart at Harmony Baptist Church. She tells of spending Saturday nights with her grandparents so she could ride on the back of her grandfather's flatbed truck down the dirt road to church. Alene was a faithful member with her family of First Baptist Church, Searcy for 46 years. She was actively involved with her Sunday School Class where she developed many lifetime friends.

Tyler and Alene moved to Little Rock after retirement to enjoy time with their daughter, son-in-law, and grandsons. They joined Immanuel Baptist Church in Little Rock where Alene was actively involved in the Elizabeth Sunday School Class. Alene learned to knit in her 90's with the help of her friends and became involved in the Prayer Shawl Ministry. Alene was a committed prayer warrior for all her family and friends. She especially loved storing up prayers for Ruth Ann, David, David III, Aubrey, Samuel, Mark, Shepherd, Lloyd and Sterling. Alene loved to read her Bible, beginning each day in God's word. She would often say how she learned something new every time she opened God's word.

Alene truly had a servant's heart, caring for her mother for over 30 years and later her husband as he suffered from Parkinson's. She loved being Nana, babysitting her grandsons and serving her family in any way she could. Nana enjoyed the past 10 years living independently at the Parkway Village Retirement Community. The time she spent with her many friends there was so special to her and a blessing to all of us. Alene loved her friends dearly.

Our family appreciates all the love, support and encouragement from everyone at Parkway Village. Alene was also blessed with three precious caregivers, angels from God. We are so thankful for Carolyn Sterns, Tonya Scott, and Vangy Moore. The Lord loved and cared for mom and our family through these precious women. We are forever grateful.

We will all miss Nana in our time here on earth but look forward to being reunited in heaven, our eternal home. I Peter 1:3-4 Praise be to the God and Father of our Lord Jesus Christ! In His great mercy he has given us new birth into a living hope through the resurrection of Jesus Christ from the dead and into an inheritance that can never perish, spoil or fade. This inheritance is kept in heaven for you.

We will celebrate Alene's life on Thursday, March 17, 2022 at 2:00 PM with a graveside service at Oak Grove Cemetery in Searcy, Arkansas under the direction of Roller-Daniel Funeral Home. Rev. Lary Tidball will lead us as we honor our Nana and praise the Lord for her life. The family requests memorials be made to Immanuel Baptist Church Missions, 501 N. Shackleford, Little Rock, AR 72211 or The Fellowship of Christian Athletes, 10421 West Markham Suite 100, Little Rock, AR 72205.

Rose Anne and family,
My friendship with Alene began about eight years ago when I learned she was a member of Immanuel Baptist Church where I attended and was unable to attend much because of health issues. I lived at Parkway Village and wanted to meet her and become friends. That happened and I was able to visit her about once a month and take her small gifts to help her feel loved and respected by other Immanuel members. We prayed and read Bible together. She was very special to me and an encourager. She will be missed for sure. May God comfort you all as she often comforted me and others.