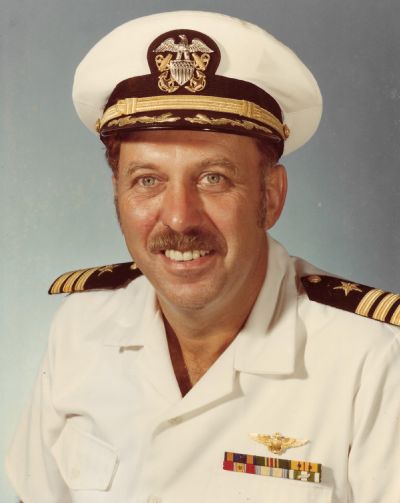 George Martin Bruen--beloved husband, father, grandfather, and great-grandfather--passed away peacefully at his home in Fairfield Bay on August 18, 2021, at the age of 89.

Born January 30, 1932, in Philadelphia, Pennsylvania, George would spend his youth growing up on the beaches of Manasquan, New Jersey, spending his summers as a lifeguard. He graduated from Manasquan High School, where he lettered in football, basketball, and baseball. George would return to Philadelphia to attend Temple University, pursuing a Bachelor's Degree in History and later a Master's Degree in Education. It was at Temple that he met pharmacy student Alfreda Szolack, who would become his wife, travel partner, and best friend.

Following his marriage to Alfreda in 1955 and graduation from Temple in 1956, George would join the United States Navy, training to be a Naval Aviator in Pensacola, Florida. He would honorably serve his country for over twenty-three years, a time which included piloting various Navy Aircraft and serving as a flight instructor. Some of his flight missions included storm tracking over Asia, where he flew into and out of typhoons; flying blimps in a squadron based in Lakehurst, New Jersey; and air reconnaissance missions during the Vietnam War.

During his Naval service, he earned a Master's Degree in Operations from the University of Arkansas in 1978, igniting a passion for Razorback Athletics that he maintained for the rest of his life. After spending two years as the Commander of the Navy and Marine Corps Reserve Center in Pittsburgh, Pennsylvania, George would retire from the Navy at the rank of Captain in 1980.
When he had concluded his military service, he would then spend eleven years as a teacher and coordinator for the Naval Junior Reserve Officer Training Corps. He taught for a year at Greenwood High School in Greenwood, Mississippi, before serving his remaining ten years as an educator at Millington High School in Millington, Tennessee.

In 1994, George retired from teaching and settled with Alfreda in Fairfield Bay. Even in retirement, he continued his life of public service as a member of the Fairfield Bay City Council, as a member and later President of the Fairfield Bay Community Club Board, and lastly as a five term Justice of the Peace on the Van Buren County Quorum Court. He also played a role in the Van Buren County Republican Party's transformation from a nonentity to a major factor in the county political scene as he served multiple terms as the County Party Chairman and ran as the Republican nominee for Van Buren County Judge in 2000.
He and Alfreda remained avid golfers and tennis players after moving to the Bay. They also spent many a sunny day with their family enjoying the natural beauty of Greers Ferry Lake.

In addition to his beloved wife of 65 years Alfreda, George is survived by his daughters Karen Bell, Denise West (Sam), and Kathleen Brown (Mark); grandchildren Charlie Brackey (Melinda), Joe West, Erin Brown, John West, Jack West (Lauren), and Maggie Brown; ten great grandchildren and one step-great grandchild; and numerous nieces and nephews. He was preceded in death by his father John, his mother Anna Marie, and his granddaughter Maria Brackey.

Funeral arrangements are through the Roller-McNutt Funeral Home in Clinton. A memorial service will be held at Faith Lutheran Church in Fairfield Bay, where George was a member, on September 10 at 10am.

May he rest in peace now. I wish I had met him earlier. He will be mssed.

Thoughts and prayers for the family. He was a great teacher and mentor. He will be dearly missed.

Capt Bruen was a great guy,lots of memories and lots of times he would mentor me and cheer me on when I was ready to quit

CAPT Bruen was my hero and mentor. He encouraged me to be a better person. I am sad that I didn’t get another chance to see him before he passed. Fair winds and following seas, Sir!

Alfreda, so sorry for your loss. Prayers and blessings.

With heavy heart we say goodbye, remembering all the good times of the past.
We know you are at peace in a better place, but we will still miss you.

My prayers and condolences go out to the family. I appreciate George’s service to the Fairfield Bay community and Van Buren county. A good man!