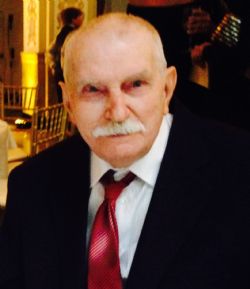 John Byrd, 96, of Paragould, formally of Marion, passed away Sunday, June 6, at his residence. He was born December1, 1924, in High Point, North Carolina, to S.J. and Bessie Nola Byrd.
John was previously a long-haul truck driver, a Gideon, an avid outdoors man and enjoyed gardening. He was a Nascar driver for two years and was in the Navy during World War II. Mr. Byrd was a member of Mt. Zion Baptist Church.

Preceding him in death are his parents and two sons, John W. Byrd, Jr. and Danny Byrd.

Graveside funeral services will be at the pavilion at Crittenden Memorial Cemetery in Marion, Saturday, June 12, at 12:30pm with Pastor Steve Jacobson officiating. Family will serve as pallbearers.

Preceding the service, visitation is at Roller Citizens Funeral Home in West Memphis, 11:00am.

Roller-Farmers Union in Jonesboro is in charge of arrangements
.

Prayers of comfort during this time.

Our prayers and condolences to our beloved classmate Tim Byrd and the family of Mr. John Byrd.

Mr John you will be greatly missed. I’m so glad I got a chance to know you & Ms Ann. Living next to you was a blessing. My prayers go out to the families & friends. RIH Mr John ♥️