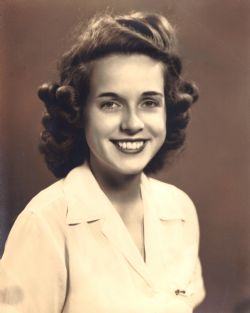 Kathleen Elizabeth ''Kitty'' Bonds passed away peacefully on May 7, 2021, in Little Rock, Arkansas, with her son at her side. She was born on July 8, 1924, in Coffeyville, Kansas, to Ed Karns, Jr. and Ruth Johnston Karns. She was raised in Coffeyville and attended public schools there. She was a graduate of the University of Arkansas, where she was a member of Kappa Kappa Gamma sorority. While at the University, she met the love of her life and future husband, Bryan Bonds. They maintained a long-distance courtship during Bryan's service in the Navy during World War II. During that time, Kitty worked as an airline hostess for Braniff Airlines and attended the University of Colorado in Boulder. After the war, she and Bryan returned to the University of Arkansas to complete their education. Kitty graduated in 1947 and taught elementary school for one year. She and Bryan were married in Coffeyville on June 27, 1948. They shared 64 wonderful years together until his death in 2012.
Following their marriage, Kitty and Bryan lived and worked in Tulsa. In 1950, they moved to Bondsville (Mississippi County) to join Bryan's father and brothers in the family farming operation. Kitty was a homemaker who was devoted to her family. She and Bryan raised their son at Bondsville and then moved to Osceola in 1970. Kitty was a member of First United Methodist Church in Osceola, and she was active in the United Methodist Women for many years. She was a past member of the Osceola Junior Auxiliary and the Lepanto Art Club, as well as two bridge clubs and a monthly supper club. She had treasured friends from each stage of her life. Kitty was a loving grandmother to her only grandchild, Laura. She enjoyed traveling with her family and friends, and they had many memorable trips through the years. She was a lovely and gracious lady who always had a bright smile for everyone.
Kitty moved to Parkway Health Center in Little Rock in 2013. Her family wishes to thank the staff there, along with special caregiver Christell Oneal, for providing compassionate care to Kitty for the past 8 years.
In addition to her husband and parents, Kitty was predeceased by her sisters Shirley Johnson and Marjorie Newsom, and her brother Ed Karns III. She is survived by her son, Steve Bonds, and his wife Barbara, of North Little Rock, and her granddaughter, Laura Bonds, of Memphis. She is also survived by several nieces and nephews. A memorial service will be held at First United Methodist Church in Osceola on May 22 at 10:30 a.m. Interment will be private. Arrangements are by Roller-Chenal Funeral Home (rollerfuneralhomes.com). Memorials may be made to First United Methodist Church, 303 South Carthon Drive, Osceola, Arkansas 72370, or to a favorite charity.