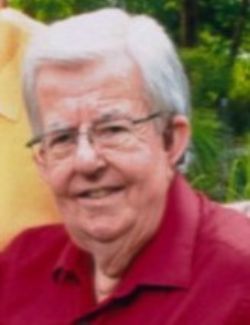 Donald R. Henderson, of Little Rock, died on April 14, 2021 at the age of 85. Don, a native of Magnolia, was a Page in the US House of Representatives for two years, rising to be Overseer of all Pages. During this time, Don completed the 10th and 11th grades of high school at the U.S. Capitol Page School which was located in the Library of Congress. Don attended SSC (SAU) and the University of Arkansas, Fayetteville. While at the U of A, Don was a member of Phi Delta Theta and was a member of the Student Senate. It was in Fayetteville that Don met Betty Dickinson who would be his wife for 56 years.

In 1975, Don joined Jack East at Sedgwick International Insurance Brokers. When Don retired as Senior Vice President of Sedgwick it brought to a close his 45 years in the Surety Bond business.

Don and Betty enjoyed showing their Champion Shetland Sheepdogs all over the U.S. and Canada. One year, their Sheltie CH. Cee Dee's Squire was the top winning Sheltie in the United States. In another year, he was the number one Sheltie in Canada. Don judged dog shows for 34 years with assignments throughout the U.S. and Canada. For seven years, Don was President of the American Shetland Sheepdog Association, an international organization of a thousand members. For his contributions in leading ASSA, he was accorded a Life Membership in the organization.

Don was one of the founders of the Arkansas Society of Antique Fountain Pen Collectors. Don and Betty enjoyed participating in Antique Pen Shows across the U.S. At one time, Don's collection included 400 pens of museum quality. Don and his collection were featured in the International Pen Collector's Magazine. Don was a Charter Member and avid supporter of Garvin Gardens. Don served Covenant Presbyterian Church as Deacon and was a faithful member of the Men's Early Morning Bible Study. Earlier, Don was active in First Christian Church where he was an Elder and Chairman of the Trustees.

Don was preceded in death by his wife, Betty who succumbed February 19, 2014. He was also preceded by his daughter, Cathy Henderson and his brother, Judge Robert Henderson of Magnolia, Arkansas.

Our Patriot will be greatly missed by his many friends across the country. God Bless America, the country he dearly loved and prayed for each day of his wonderful life.

In lieu of flowers, donations may be made to the Building Fund at Covenant Presbyterian Church. Online guestbook: www.roller-funeralhomes.com/chenal

Drew, your dad was a great man as well as your mother and Cathy being strong women. I have fond memories of our time together while our parents showed Shelties, shared vacations and the shenanigans of youth. My dad died May 24, 2021, so your folks and my dad are reliving fun times right now. May God grant you and your family that Peace that passes all understanding.

Mr. Henderson was always such a nice person. I enjoyed seeing him at the dog shows and the garden shows over the years. Him and Betty both were some of the nicest people you'd every know. He will be missed. Prayers for his family during this difficult time.

I only knew him thanks to his connection to the American Shetland Sheepdog Association, but "ONLY" is a poor way to say it. I was so sorry to read about his passing. It does appear he lead a full life which is something he shared with others. Condolences to his family in his passing.

Don was a wonderful, godly man and he will be so missed by all who knew him. We pray the family will be comforted by all who have sent their love and sympathy, and prayers. We will see him in Heaven. Blessings, Steve and Jan Kinzler

Ralph and I will always remember the hospitality and welcoming smile of Don and Betty. We were in several groups with them and enjoyed hearing Don tell stories of his many hobbies. He was a devoted church member and a joy to know.

My sincerest condolences to the family of Don Henderson. Don and I first enjoyed a successful, professional relationship in the surety business, starting in 1986 until we both retired. Then, we continued as good friends. Don and Betty were always kind to my husband and me. They were good company, and we were always entertained by the stories Don would share. He will be truly missed, but I take solace that he is not in pain and is now with Betty. God bless him.

Sending Prayers for comfort to all of Don's family. I worked for Don at Fireman's Fund in the Bond Depaftment in the '70's and oh, what a very special person he was. I will never forget him. It says alot about someone that leaves such a lasting impression through all the years....

I first got to know Betty & then Don thru the gardening community in Little Rock. Very much enjoyed visiting their home & gardens. He was involved in so many interesting activities. Always a warm friendly face to see.

It was an honor to know this kind, intelligent man. His love for his wife, his focus on helping others, his strong ethics and his many interests were some of the reasons he was a joy to know.
He will be missed.

So very sorry for your loss . Don was our neighbor and friend for many years . He will be greatly missed . He had some interesting stories to share always . We always loved his flower garden .

Although I didn’t see Don and Betty often, usually just at the occasional Sheltie event, spending a few minutes with them was always a pleasure. Don was a true Southern Gentleman. He will be missed.....

It was a pleasure to serve with Don on the Board of Directors of the American Shetland Sheepdog Assn. Don was ever the gentleman. He and Betty were fine members of the organization, and they gave of their time and talents freely. Prayers for his family.

Our deepest sympathies to Don’s family. Our children were of similar ages and we spent time together camping and showing Shelties. Sorry for your loss, Drew!
Karen and Ralph

Our thoughts and prayers sent and sending love to all of the family. I'm so thankful for the time and visits that we were able to have with Mr. Don Henderson-
A wonderful Godly man.

Don hired me to my first job after getting out of the Army in 1975. He liked Mexican food and organic gardening and I did too. We hit it off and the rest is history. Our thoughts and prayers are with the family. Ron