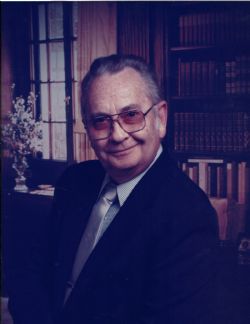 James Elton Holland, affectionately known as PawPaw, passed away on March 14, 2021 at 90 years of age. A long time resident of West Memphis, he was born on July 6, 1930. He was married to his wife, Sally, for 65 wonderful years. Elton started his career at Malco Theatres, Inc. as an usher at the age of fourteen. He retired as advertising director with over forty years with the company. He became the youngest manager to ever operate the company's flagship theatre, the 2800 seat Malco Theatre in Memphis, at the age of 26 years old. He won many awards and plaques in recognition of his outstanding work in the theatre business. Mr. Holland was known for his contagious laugh and positive attitude. He was always easy to locate by following his whistling. He was also known for his honesty, integrity and wisdom. He was often sought out for advice from his employees as well as his employers. He was a mentor to many young people, many who were new to the job industry. He had the privilege to see hundreds of young people grow, and mature with increased confidence as they continued their education, careers and started families of their own. He was a great teacher of life who taught by example how to love, care, support and lend a helping hand or a listening ear. He also stood up for injustice and fought for what was he thought was right and just.

His wife, Sally, called him "her jewel", but close by you could hear his chuckle and him saying "more like a diamond in the rough". He would make up hilarious song lyrics and sing to the delight of the young and old. He was known by many for his jocularity. Mr. Holland contracted polio as a child and his condition prevented him from joining the armed forces during war times. He showed support and patriotism by being a part of Malco Theatres and using Hollywood movies to uplift spirits for the military and their families. This allowed soldiers and the families to escape the worries of war and be entertained for a few hours with popcorn and a coke.

Mr. Holland also enjoyed challenges and adventures. It wasn't unusual for him and his family to spend a year planning the next vacation. He introduced his family to beaches and oceans, clear streams in mountain ranges, and deserts and canyons all over the USA. He was a history lover so national parks, monuments and museums were also frequent stops. Camping was also an enjoyable pastime from pitching tents, trail hikes and cooking dinner from what was caught in the nearby stream.

His imagination and creativity was seen not only through his work at Malco but at home as well. Family birthdays and holidays were full of surprises. Similar to the art department basement built monsters to promote a horror film for Malco or tons of dry ice to create a spooky ground cover for Sivad and his hearse. Sivad was a household name in the Mid-South. Watson Davis and Mr. Holland worked long hard hours to bring the ultimate entertainment experience to the public. Mr. Holland was famous for his advertising methods involving just old fashioned fun.

After retiring from Malco he worked for the Pinkerton Corporation. He worked at WMC-TV and enjoyed his position there helping people with their personal safety and security. He enjoyed greeting and conversing with employees and visitors. He always tried to make their day brighter and enjoyable. He also worked a short time at Fed-Ex before retirement called him again.

Mr. Holland was a long time member of First Baptist Church. He was also a long time member of the Rotary Club, supporter of United Way, and an honorary deputy sheriff. He was also an honorary Girl Scout for providing transportation and storage for Girl Scout cookies and camping equipment. Mr. Holland was also the recipient of the ribbon for fastest time in his age group in the Race for The Cure at the age of 70 years old.

Visitation will be held at Roller Citizens Funeral Home in West Memphis, AR on Saturday March 27th from 9:00 am to 10.00 am followed by funeral service at 10:00 am. Memorials are asked to be sent to First Baptist Church West Memphis.

You put such heartfelt, beautiful words together for everyone to feel like they knew the heart and soul of the man, James Elton Holland! A wonderful tribute to the whole family with all the photos on your video. All of you worked so hard to honor a man you can tell you loved with all your heart. You have many memories to help you through these rough times ahead. You will be in my thoughts and prayers.

You put such heartfelt, beautiful words together for everyone to feel like they knew the heart and soul of the man, James Elton Holland! A wonderful tribute to the whole family with all the photos on your video. All of you worked so hard to honor a man you can tell you loved with all your heart. You have many memories to help you through these rough times ahead. You will be in my thoughts and prayers.

Fly high in the firmament Papaw Elton! You will be incessantly missed here on this heavenly earth!

I have been a neighbor 3 houses down from Mr. & Mrs. Holland for 43 years. I also worked at Internal Medicine Asso. of West Memphis where they came for their medical care. They were both such a delight. Mr. Holland was most certainly one of a kind. I'm so sorry for your loss but I'm sure you all have many precious memories of them both.

He will be truly missed. Thoughts and prayers to the family.

Holland family, please know that you all are in my thoughts and prayers!

What a great soul!! He was an inspiration to me and my clinic. Never encountered this fine gentleman when he was not the most polite and courteous person in the room. His greetings were genuine and unique, which matched his personality as well. I will truly miss our conversations and his vibrant personality. Prayers for his family!!