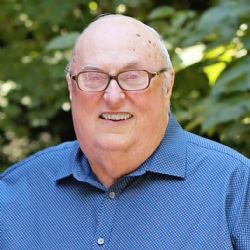 On Thursday, February 4, 2021, Dr. Dick Bryan Clough passed away peacefully in his sleep at age 83, at his home in North Little Rock, Arkansas.


Dick was born on August 4, 1937 in Murphysboro, Illinois to Lester & Norma Dickey Clough. His siblings were Fleda and Phyllis.


He was an educational leader for over 40 years. He received his BA degree in history from Southeast Missouri State College in Cape Girardeau, MO in 1959. He taught history and social studies in Charleston, Missouri before transitioning to Principal. He earned his Masters degree in education from Southern Illinois University. Dick continued his education, earning his Ed.D. in Educational Leadership at Memphis State University in Memphis, Tennessee. In 1980 he was appointed to lead the Lee County School System in Arkansas as superintendent for 6 years until his retirement in 1986. Afterwards, he held a professorship at University of Central Arkansas, in Conway, AR. His career exposed him to every level of educational supervision. One of his former students said about Dr. Clough that he was the best college professor she'd had because he had a personal story to tell about every point he made in class. He made the course material more understandable and relatable. He had a good sense of humor and enjoyed the academic camaraderie of campus life.


Dr. and Mrs. Clough co-authored two educational resource texts, Utilizing Teacher Aides in the Classroom, and A Handbook of Effective Techniques for Teacher Aides (both published by Charles C. Thomas in 1978). He also was a contributor to a number of scholarly journals.


Dr. and Mrs. Clough have been active members of Christ Episcopal Church in Little Rock, AR.


His and Bonnie's love of history and culture drew them to travel extensively throughout the world during their marriage, having only paused their travels in 2020 due to national travel restrictions. They traveled through the Panama Canal, toured South and Central America, both coasts of Canada, Scandinavia, and most of Europe and Asia, including a study trip to the Soviet Union. One of his favorite journeys was a 6-week tour of Australia.


Dr. Clough was a fervent baseball fan. He enjoyed rooting for the St. Louis Cardinals while watching them on TV, as well as on annual trips to St. Louis to attend a week's worth of games. Closer to home, he was a season ticket holder for the Arkansas Travelers; he and Bonnie could be found cheering in the Travelers' stands during their home games.


He was also active at the Hays Center where he and Bonnie enjoyed learning Tai Chi with their friends.


Dr. Clough, also a patron of the arts, supported and attended performances of the Arkansas Symphony Orchestra and Arkansas Repertory Theater.


A memorial service will be held at a later date. In lieu of flowers, memorials may be made to Christ Episcopal Church in Little Rock and Habitat for Humanity.

May Dick strength to strength in God's tender care. We knew Dick and Bonnie when they were in Marianna. Dick had good sense a humor. They belonged St. Andrew's Episcopal Church. Condolences for the family. With love, Vince and Nada DeSalvo

I enjoyed working under the direction of Dr. Clough in Marianna. He was a good man. My heart is with you Bonnie. Much sympathy, Mary Keogh

I loved seeing Dick's smiling face when he was walking down the hall or getting morning snacks at LifeQuest. I loved saying good morning and asking about Bonnie, who had been a docent with me at Arkansas Arts Center. I had no idea about the outstanding and amazing background of both Dick and Bonnie. When our life gets back to normal again I will miss seeing Dick so much. Talking with him and seeing him smile made me so happy! Sending my love and prayers to Bonnie.

Dr. Clough was such an outstanding professor. When I became a college instructor, I often reflected back on his classes as an example of true instructional leadership. I am so sorry to hear of his passing. My prayers are with you and your family during this difficult time.

We are very sad to hear about Dr Clough and his passing. He was a very interesting person who I was privileged to talk with several times at Christ church. He and his lovely wife are very active members of the Christ church family and we will miss him very much. May he Rest in Peace and Rise in Glory.
In Christ love
James Green and George Rook