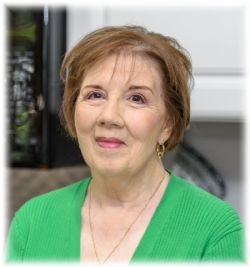 Carolyn June Turner Scott, 77, of Oklahoma City, OK passed from this life on January 20, 2021, from complications following surgery. She was born on December 3, 1943, on a farm northwest of Scranton to Mary Opal Nicholson Turner and Claude John Turner.

After graduating from Scranton High School in 1961, Carol started a career in communications where she worked in radio and television, including at stations KPOK and KTCS in Fort Smith and Channels 4, 5, and 9 in Oklahoma City. She left the media field to work at Wright Business School in Oklahoma City. She worked there for most of her career and retired after more than 30 years of service. She served as a Financial Aid Administrator for several years before being named Director of the school, which also included campuses in Wichita, KS and Kansas City, MO.

Even though Carol was a dedicated and successful career person, her main focus in life was family. She adored her grandchildren and spent as much time as possible with them. Her goal was to create a positive atmosphere and to be a good role model.

She was preceded in death by her parents, her sister Helen Louise Turner Donaldson, and her brother Billy John Turner, as well as her close friend Peggy Joan Scott of Oklahoma City.

Graveside services will be held at McKendree Cemetery on Friday, January 29, 2021 at 2 p.m. under the direction of Roller Funeral Home in Paris. In lieu of flowers, donations may be made in her memory to McKendree Cemetery, PO Box 484, Scranton, AR 72863.

Carol was a wonderful grandmother and always had a outlook on life.
She would do all she could to make sure her grand babies knew she loved them.
She will definitely be missed by all that had the pleasure of knowing her, Rest In Peace carol.

Carol was an amazing person and I will miss her dearly.

Carolyn and I were friends from 1st grade until we graduated in l961, I considered her my best lifelong friend. We spent many hours riding a bus to ballgames and other school events. She was strikingly beautiful and a great basketball player. We spent lots of time dreaming of what our lives would be like. I am so glad she enjoyed such a great career and I just know she was a blessing to those she worked with.

One of my closest and best friends, Carol was a very special lady to me, and I’m sure to many others. I miss her.

We send our sincere condolences. She was a 1961 classmate of Wayne's.