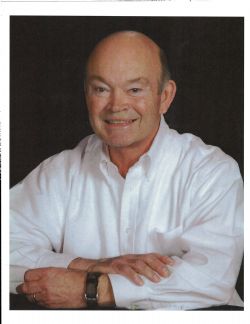 William Frank (Bill) Slaughter, 81, died on October 15, 2020 in the home that he lovingly built for his family in West Memphis, Arkansas. He was a devout Catholic and a communicant of Saint Michael's Catholic Church.
Bill was born August 17, 1939 in Caruthersville, Missouri to Alvah and Grace Slaughter. The family later moved to West Memphis where Bill attended Saint Michael's Elementary School and West Memphis Senior High School. He went on to graduate from Christian Brothers College and the University of Tennessee College of Pharmacy. While he was a student, he was an employee of City Drug Store in West Memphis. He eventually bought City Drug Store and built a new building at 1701 East Broadway to house the business. He continued to serve the community from this location for 50 years until he closed City Drug Store in 2018.
In 1960, Bill married Anita Manning. Although the union was not permanent, Bill and Anita had three children together. William Frank, Jr., Cynthia Lynn, and Edward Morris. Bill was a lover of all animals, especially horses. This love of horses helped lead him to be an accomplished farrier. He showed his horses and greatly enjoyed spending time taking his family to horse shows. Some of his happiest hours were spent in his barn surrounded by his horses, as well as his favorite dogs, his favorite cats, his children and eventually his grandchildren.
In 1982 Bill married Katherine Callan. Katherine's two children, Jeffrey Mullen and Traci Mullen were lovingly welcomed into the family by Bill. Bill is survived by his wife of 38 years, Katherine Callan Slaughter; his two sons, William, Jr. and Edward (Sherry) Slaughter; his son-in-law Luke Jones; his stepdaughter Traci (Rob) Ward; his stepdaughter-in-law Tracy Mullen; his grandchildren William Jones, Zachary Jones, Samuel Mullen, Jackson Slaughter, Benjamin Mullen, Faye Ward, Grace Anne Slaughter, Maddie Ward and Nathaniel Mullen. He was preceded in death by his parents Alvah and Grace Slaughter; his sisters Patricia Baugh and Margaret Wilbanks; his daughter Lynn Jones and his stepson Jeffrey Mullen.
The family invites everyone to join them for a Visitation, Family Reflection, and Rosary on Thursday, October 22nd in the courtyard of Saint Michael's Catholic Church. The Visitation begins at 5:00 o'clock followed by the Family Reflection and Rosary at 6:30 pm. The Mass of Resurrection and interment on Friday will be private. Memorials may be made to Saint Michael's Catholic School 405 N Missouri St, West Memphis, AR 72301
.
Roller-Citizens Funeral Home will be following guidelines issued by the Arkansas Department of Health and the CDC regarding COVID-19. Social distancing of at least six feet must be practiced and all funeral attendees must provide and wear their own mask.

Bill was a friend to Cliff and me. We enjoyed his humor and knowledge.
He was especially good to my parents, the Arnett’s. The community will miss him. Our prayers for the family.

Bill was a long time friend he will be missed. Prayers and sympathy for the family.

Because Keith is having surgery the same day as the Rosary we are saddened we will not be able to attend. Bill was one like no other and we consider him a very close friend.

Bill was my friend since I was a child. He was a mentor to me with horses and life. I can't tell you how much my family loved him. I will miss you!


So sorry to hear about Bill. Please know that our family will miss him greatly.

Prayers for my good friend Bill and his family.

Dot and I are so sorry to hear of Bill's passing. We had been friends for over 70 years.

If Bill wasn't the finest Man in West Memphis I don't know who it would be. Bill treated all with compassion!! Didn't matter who you were. His advice was above all else and free. I can't even start to tell you of our closeness and all the things we talked about and how he cared for me. Growing through my adult live, say from 20 till now, or back almost four years ago when I had to go to the er and then on to Memphis for my first stay in the hospital. The assigned Dr I got asked who my Dr was, I told her I didn't really have one. Hadn't been in the hospital since I had my tonsils taken out at a young age. Bill was my Dr. Yes I had been to doctors a few times in my life and yes it was because after talking to Bill he sent me to who I saw. This was only twice.. I could tell lots of stories about him but I'm sure we all have them. I send my prayers to the family he loved so much for a peace and comfort that they can know not only comes from our Lord but from Bill too.. I will never in this life forget Bill and the times we shared... The Lord got a good man in Bill and I thank the Lord for sharing him with us..

So sorry to hear about Mr Bill. Such a good and respected gentleman. He always went above and beyond for everyone that he came in contact with. Treated all of his customers at the drugstore so well that they wouldn’t dream of going to one of the big chain pharmacies. Loved his horses and his family. Will be missed by all. RIP sir.

Sorry to hear about William , he Will greatly missed.

So sorry to hear about Bill. He was such an important part of my teenage years. He made a huge impact on my life and remained a good friend through adulthood.