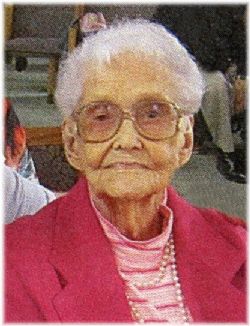 Although born and raised in Oklahoma, Wilma and the Moore family moved to Ratcliff, Arkansas in 1936 as she was entering high school. Wilma was a graduate of Ratcliff High (1941) where she and older sister, Leona played on the basketball team together.

After high school Wilma married local resident Troy Bell who was drafted into the U.S. Army and shipped out to training camp and service in WWII. Like many young couples impacted by WWII, Wilma and Troy settled on the West Coast, specifically in the San Francisco Bay Area of California. While Troy was in the service overseas Wilma and her sister, Leona worked in the shipyards of Richmond, California, providing much needed home labor for the war effort. Female workers who built ships and planes and worked in the war effort became know in a general sense as ''Rosie the Riveter'', that role could include Wilma and Leona!

Wilma and Troy lived their post war life in California where they raised their family of boys, Bill (born 1942) and Jack (born 1945). The Bells lived in the small town of Niles which became conjoined with other small communities into the town known today as Fremont. Troy only had 1 job his entire post-war life, ''sweating-it-out'' working in a large steel mill factory, Pacific States Steel in Union City, the neighboring town to Niles. After their family was grown and when Troy retired, Wilma and Troy left California and moved back to their home community of Paris, Arkansas in the late 1970's.

Family was precious to Wilma, including her parents and grandparents. She had an uncanny ability to remember significant family dates. Not many people can accurately remember the dates their grandparents, parents and siblings passed away and at what age but she could. Wilma was a devout Christian who faithfully attended Paris First Assembly of God for many years; she loved her church family. Wilma served as a Sunday school teacher, was an avid Bible reader and was devoted to prayer. While passing through her nineties, especially as her energy faded in recent years, she would often speak of her desire to be reunited in heaven with those precious loved ones who have gone on to eternity before her. Preceding her in death were father, William Moore (1896-1983); mother, Winnie Mae (1898-1988); sisters, Vestava, Leona and Emogene and husband, Troy (1920-1991).

Wilma is survived by: sons, Bill Bell of Boise, Idaho and Jack Bell of Exeter, California; granddaughters, Beth Miller and Brenda Dunn, both of Boise, Idaho, Colleen Montgomery and Melisa Bell, both of California; eight great grandchildren and one great-great-grandson.

Graveside services will be held at 10:00 a.m., Thursday, September 10, 2020, at Caulksville Cemetery with the Rev. Kenny Maness officiating. Burial will follow under the direction of Roller Funeral Home in Paris.

I remember my youth with my grandmother, mother, Aunt Lee and Wilma. At holidays we always had a busy kitchen with lots of wonderful food. Aunt Wilma was a great cook. When I was a child, my mom had surgery. Aunt Wilma came over to our house every few days to make sure all was well, bring food and help me prepare some meals.

I also remember that Uncle Troy would buy Aunt Wilma beautiful, elaborate Valentine's Day candy boxes---gorgeous! My Aunt Wilma would repurpose them and make homemade fudge and candies, refill the boxes and give them to me. It was very special and appreciated.

After I grew up, I went to grad school at ORU. By that time Aunt Wilma had moved to AK. So I had an opportunity to enjoy a Thanksgiving with my Aunt---who was still a great cook. It was a special time and I still remember these marvelous honey-baked onions she made (wish I had the recipe). We had a delightful time chatting and cooking.

My last visit with Aunt Wilma was when I was able to introduce her to my husband. She was sharp as a tack, had a lovely apartment and was full of family stories.

Wilma was a very sweet lady. When her and Troy lived in Ratcliff she was our neighbor. We have so many fond memory of her. I remember one summer she introduced us the a banana split dessert, one we still make today. She will be missed.

Wilma was a very special aunt and I will miss her greatly. In recent years we had many wonderful phone conversations, it was always a joy to talk to her. She loved her family, including her extended family, and above all really, really loved the lord. I will truly miss her but knowing that she is in heaven enjoying the reunion with her family that she loves so much is very reassuring and joyful.

Wilma was so sweet, kind, and always smiling. She truly lived a Godly life. She will be missed