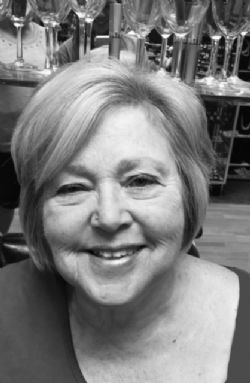 It is with deep sorrow that we announce the passing of Karen Lee McIntosh of Benton, Arkansas. She was born on May 11, 1948 in Little Rock, Arkansas and passed away on July 21, 2020, at the age of 72.

Karen was a Registered Nurse, receiving her Master's degree in Nursing from the University of Arkansas for Medical Sciences. She retired from the VA Hospital in 2005 after many years of service. She is preceded in death by her parents, Ira Lester and Clyde Mae Greene (Benton, AR) and her baby sister Karla Kitchens (Bauxite, AR).

Dear Rudy,
I was very sorry to learn of Karen's passing. Please accept my deepest sympathy.

Your friend from the dog park- Jim Krueger

My thoughts and prayers are with your family. May you find comfort in knowing she is with our Lord now.

Aimee,
I am very sorry for your loss. Sorry I just am catching snippets here and there. May God continue to cover you in His loving arms.
Prayers to you and your family.

Weep not, weep not, she is not dead; She's resting in the bosom of Jesus. Heart-broken husband--weep no more; grief-stricken son--weep no more; left-lonesome daughter--weep no more; she only just gone home. Day before yesterday morning, God was looking down from his great, high heaven, looking down on all his children, and his eye fell on Sister Karen, tossing on her bed of pain. And God's big heart was touched with pity, with the everlasting pity. And God sat back on his throne, and he commanded that tall, bright angel standing at his right hand: call me Death! And that tall, bright angel cried in a voice that broke like a clap of thunder: Call Death! Call Death! And the echo sounded down the streets of heaven, 'till it reached away back to that shadowy place, where Death waits with his pale, white horses. And Death heard the summons, and he leaped on his fastest horse, pale as a sheet in the moonlight. Up the golden street Death galloped, and the hooves of his horses struck fire from the gold, but they didn't make no sound. Up Death rode to the Great White Throne, and waited for God's command. And God said: Go down, Death, go down, go down to Benton, Arkansas, down in Saline County, and find Sister Karen. She's borne the burden and heat of the day, she's labored long in my vineyard, and she's tired--she's weary--Go down, Death, and bring her to me. And Death didn't say a word, but he loosed the reins on his pale, white horse, and he clamped the spurs to his bloodless sides, and out and down he rode, through heaven's pearly gates, past suns and moons and stars; on Death rode, leaving the lightning's flash behind, straight down he came. While we were watching round her bed, she turned her eyes and looked away, she saw what we couldn't see; she saw Old Death. She saw Old Death coming like a falling star. But Death didn't frighten Sister Karen, he looked to her like a welcome friend. And she whispered to us: I'm going home; and she smiled and closed her eyes. And Death took her up like a baby, and she lay in his icy arms, but she didn't feel no chill. And death began to ride again--up beyond the evening star, into the glittering light of glory, on to the Great White Throne. And there he laid Sister Karen on the loving breast of Jesus. And Jesus took his own hand and wiped away her tears, and he smoothed the furrows from her face, and the angels sang a little song, and Jesus rocked her in his arms, and kept a-saying: Take your rest, take your rest. Weep not--weep not, she is not dead; she's resting in the bosom of Jesus.

Rudy,
We are so sorry to hear about Karen. We are thinking of you and your family during this sad time.

Rudy so sorry to hear about Karen. Lois called me yesterday.She was a great person and a good wife to you. She loved all her friends and family. God bless you and all your family. Kay and Danny

Rudy, I am so sorry to hear of the passing of your lovely Karen. Praying for the family. Thinking of you, From JoAnn part of the ORM Family🙏

Rudy,
Prayers for comfort and peace are with you and your family.

I am so sorry to learn of Karen’s passing. Heaven truly has gain another angel. Karen was such a beautiful person, inside and out! I am honored to call her friend! Much love and prayers to Rudy and all the family.

My deepest sympathy to you and your family during this difficult time. You are in my thoughts and prayers.

I am so sorry for your loss and my thoughts are with you!
Karen was awesome in so many ways, and she will be missed by so many! I know that she will live on in your hearts and your memories. Much love to you all❤️ Chris

Thinking of you all and the great loss you have experienced. Mrs.Karen was a lovely soul and kind to all who had the pleasure of knowing her. Prayers that each of you will find comfort and peace during this difficult time.

Sending thoughts and prayers to Rudy and the Family. Marcia and I are very sorry to hear this news. God Bless.

So sorry for your loss. Stay strong in the Lord.

Rudy, I'm so sorry to learn of your wife's passing. Prayers for you and your family in this difficult time.

So sorry for your loss sympathy for your family R.I.P. Will miss the little chats and comments on my post 🕯️🕯️🕯️😭