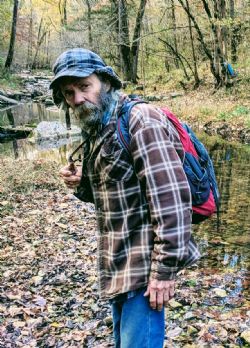 He is survived by his sons, Jeremy Mueller of Highland Village, TX and Jason Mueller of Dallas, TX, their wives, Meagan and Mariel, and four grandchildren.

Born on April 25, 1952 in Independence, MO and raised in Topeka, KS, Chris had a farm in northeast Kansas in his early adult years before embarking on a nomadic life across the U.S. The last years of his life were spent in Kansas before settling on his long-searched-for ideal piece of property in north central Arkansas.

In his early years, Chris became a computer programmer when computers were the size of houses. During this time he moved to a piece of land outside of Lawrence, KS and spent about a decade experimenting with running a self-sustained farm. His goal was to survive without modern conveniences, like electricity and running water, much to the dismay of his young sons, who spent several years serving what at the time felt like forced labor on an 18th century frontier homestead, but later came to appreciate many parts of their experience there.

In the mid 80's, Chris's interest in pre-modern cultures led him to hit the road, travelling with his teepee to rendezvous across the western and midwestern United States. During this time he honed his wood carving skills and made a modest living selling pine knot carvings at rendezvous and boutique shops across the country.

After years of travelling with the teepee, Chris decided to continue his nomadic journeys by staying on the road full-time, taking seasonal jobs and searching out experiences that interested him. Seasonal jobs included things like planting trees in Mississippi, picking berries in Maine, skinning elk in Colorado, volunteering at National Parks, and working at a small zoo in Ohio where one of his responsibilities was taking care of Scooter the groundhog, who notably co-starred opposite Bill Murray in the 1993 seminal film, Groundhog Day.

Searching out experiences that interested him led to serving several stints as a field researcher at scientific research stations in Arizona and Colorado. He taught skills such as blacksmithing, timber framing, and sustainable farming practices to volunteers at Tillers International in Michigan, and was named volunteer of the year there in the early 2000's. Another experience took him to the eastern U.S. restoring buildings of historical significance, including working with a team to painstakingly deconstruct, move, and restore the pub where Lewis and Clark planned their exploration of the West.

Chris's appreciation for animals didn't end when he left the farm life. He spent time volunteering for various animal rescue organizations and even made his RV a home for a few lucky animals. One of these animals was a rescued groundhog that adapted to the travelling lifestyle seamlessly, often sitting on the steering wheel like Scooter's memorable scene in Groundhog Day. But, unlike some people, he didn't need chainmail fitted under gloves to protect his hands from the groundhog (I'm looking at you, Bill Murray).

Chris had a mission to live as untethered to modern society as he could. As complicated as his personal relationships were throughout his life, he followed his convictions and led an independent and undeniably interesting life for which he will be remembered.

In lieu of flowers, anyone wanting to honor his memory is invited to make a donation to Tillers International.

I remember all of the times Chris would come through my life unexpectedly but always interesting. He would help me with projects around house. Shoot the bull and drink beer. Had marathon Yahtzee games. My wife Joyce and I enjoyed spending time with him in Arkansas. In recent years, I enjoyed our morning chats. We will miss you Chris! Continue on with your adventures.