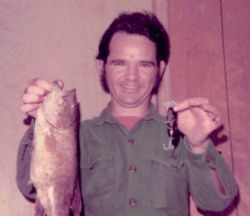 Bobby Gene Thompson, 76, of Mountain View, Arkansas, passed away on January 31, 2020. He was born to Walter Eugene Thompson and Ruby Lois Allen, January 16, 1944, in Salado, Arkansas. Growing up, he spent his day fishing at the creek.
He worked in his younger years as a machinist and as a mechanic for most of his life. On an average day in the 90s, you could catch a glimpse of Bobby as he passed you on his Suzuki motorcycle. During the day, he would be at his shop tinkering on a three wheeler motor until it purred just right. In the evenings, Bobby could always be found running the Stone Drive-in that his father built. After the movie, he would take his family in their Jeep to the creek for fishing, catching bullfrogs, and a cookout. His family will always miss those late night creek cookouts. Bobby had a great love for the movies and the outdoors. He had a mind for engineering, could always be found tinkering on his fishing rod or improving his bow, and always enjoyed sharing his latest ''new and improved'' bow design.

He was preceded in death by his father Walter Eugene Thompson, his sister Maxine Thompson, and his brother-in-law Bob Summerville.

Bobby will be laid to rest with his family at Kyler Cemetary in Southside, Arkansas.

Sorry for your loss.

To all his family and friends, I send my heart felt condolences. I knew Bobby a long time and feel he lived mostly how he wanted and did things his way. Like most of us he was not always easy to get along with but he was an honest person and true to his self. Rest in peace Bobby. A friend from long ago. Wilma

So sorry for your loss. My condolences