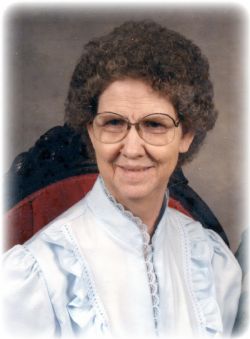 Hazel "Avanell" Wright, 86 of Pangburn departed this life on January 6, 2020 at Belle View Estates in Monticello, Arkansas. She was born September 14, 1933 to the late John B. and Cora Ferren Edwards in Searcy, Arkansas.

Avanell was a resident of Pangburn and a charter member of the First Assembly of God church in Pangburn. She was a beloved mother, grandmother and a home maker.

She is preceded in death by her husband L.H. Wright, her parents, one son Lewis Wright, JR, and one grandson Jay Wright.
Avanell is survived by two sons Johnny Wright and Melanie of Searcy, Darrel Wright and Sharon of Pangburn; two daughters Valeria Taylor and Randy of Pangburn, Margaret Norris and Terry of Monticello; six grandchildren, nine great grandchildren, two great-great grandchildren and a host of family and friends.

Visitation will be held from 6-8 PM Wednesday, January 8 at Roller-Daniel Funeral Home in Searcy. Services will be 2:00PM Thursday, January 9 at the Pangburn Assembly of God Church. Burial will follow at Henderson Cemetery in Pangburn.

Our Love and Prayers.