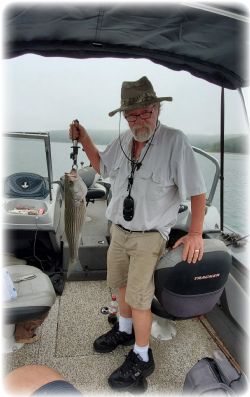 Thomas Lee Alexander, 66, of Yellville, Arkansas departed this life on October 22, 2019 doing what he loved.

He was born on January 27, 1953 in Gary, Indiana to Robert Lee Alexander and Carol Magdeline (Kurth) Alexander.

Tom attended Escondido High School in Escondido, California and later moved to Yellville in 1979. He raised his three children: Jason, Greg and Daniel Alexander on his farm, sharing his love of the outdoors with them throughout their childhood.

He married his soulmate Valerie McPherson on November 13, 2010, and they enjoyed an active yet quiet life together in Yellville, Arkansas until his passing. Tom was a wonderful husband, father, and friend, who always had a smile on his face. He was an avid outdoorsman and enjoyed hunting and fishing, taking care of his farm, watching football...especially the Kansas City Chiefs, having cookouts and getting out on the lake with his friends and family, and just living life.

He is survived by his wife, Valerie, his sons: Jason Alexander, Greg (Jessica) Alexander, Daniel (Audra) Alexander, 12 grandchildren, 1 great-grandchild, his sisters: Karen (Steve) Adams, Cindy (Craig) Kittrell, many close uncles, aunts, and cousins, and countless friends. He has left a hole that cannot be filled.

Tom was preceded in death by his parents and sister, Denise Lynn Damazio.

A private memorial will be held at a later date.

In lieu of flowers, the family would appreciate donations to Hospice of the Ozarks.

So sorry for your loss, I really liked him. Prayers for you Val and the family.

He was a great man, I learned alot from him and still live by his lessons. I will miss you Dad.

Prayer to all of you.

Tom was an easy going good guy. Prayers for Val and you’re family. RIP my friend.

He was a great guy! I will miss him.

Sending thoughts and prayers to family and friends....

We worked with Tom at Mammoth Springs Arkansas 17 years ago at The Hatchery we built ! Tom was a good inspector n we really enjoyed working with him !!!!, Tom became a good friend ! So very sorry for your loss ! Praying for all peace and comfort !

My heart is broken as this world has lost a very beautiful man. I didn’t know him real well myself, but knew plenty of him as my son-in-law always bragged about his father. I did have a great opportunity to hunt and fish with Tom a couple of times and enjoyed hunting on his property several times. He was a kind and sweet man and I know he was a wonderful Father and grandfather. He will be sorely missed. Rest in peace Tom.