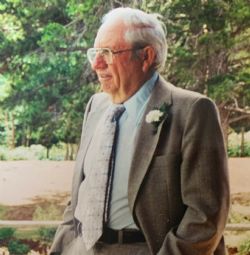 William Nathan Irvine of Timbo and Mountain View passed away on Thursday, August 29, 2019 at the age of 95.

Nathan embodied all that is best of the greatest generation; self-reliance, duty, honesty, integrity and a love of God. He honored God, family, his fellow man and his country.

Nathan was a dust bowl child who moved to Timbo in 1933. After graduating high school at the age of sixteen, he and his father Richard travelled the country working various jobs to support their family. Upon the death of his father, he returned to Arkansas and married his childhood sweetheart, Georgia Perry of Timbo.

Nathan and Georgia traveled with their family wherever his work took them. They both enjoyed and appreciated the opportunity Nathan's work afforded them to learn about different cultures. Nathan learned both Farsi and Urdu and came to respect and admire the cultures and peoples of the lands in which they lived. They respected the common moral base of each person who worshipped the creator no matter their religion. The people they met liked and respected them for their character, curiosity and open hearts.

Nathan was a man of many talents who honored those values taught him by his parents by living those values. He could be counted upon professionally and personally. But, with a modesty typical of him, he never mentioned nor boasted of any accomplishment. He attributed his achievements as much to the Lord's gifts as to his own efforts. He was the man you wanted by your side in good times and especially during trying ones. Small of stature, he was capable of bearing and sharing great burdens. He admired a job well done at every level; a janitor or a CEO were equally worthy if they did their jobs speedily and well. Men were proud to earn his respect because it was given by a man of moral worth. He had a rare combination of ingenuity, boldness and competence in his thinking.

Upon retirement, Nathan and Georgia returned to their childhood home in Timbo. Georgia joined her daughter Sheryl Lynne in the music life of their community. For the next thirty years Nathan raised cattle and horses on the family land he loved. He was active in the Timbo Valley Assembly of God Church, the Timbo Fire Department and served on the board of West Stone County Water Association.

Nathan will be missed on earth and welcomed in heaven. He was an example to us all.

A memorial service will take place on Saturday, September 28, 2019, 2:00 PM at Timbo Cemetery in the pavilion with Brother David Campbell officiating.

I stumbled upon this looking for cousins on my mother's side. Was Sheryl Lynne William's only child?

Did Sheryl Lynne have children? I have a photo of William taken in 1928 with a Richard Irvine holding an R.D. IRVINE and Hazel IRVINE.